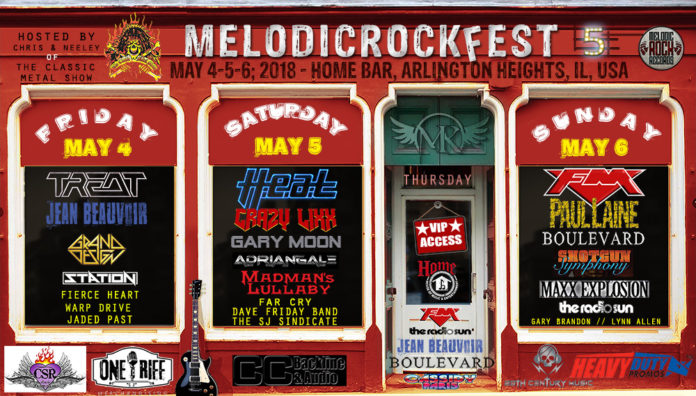 The MelodicRock Fest began on Thursday, May 3, 2018 for those who were lucky enough to secure VIP ticket packages. The evening’s marquee promised special intimate appearances from Cassidy Paris, The Radio Sun, Boulevard, Jean Beauvoir and FM.

And, delivered, with a Q&A with Chicago native and legendary performer and songwriter Jean Beauvoir of The Plasmatics, Voodoo X, and Crowne of Thorns, as well as an unexpected guest appearance on from Paul Laine of the Defiants and Danger Danger, performing a solo set with The Radio Sun‘s Steve Janevski and Jason Old.

At only fifteen, Australian native Cassidy Paris brought energy to the weekend with a style not much different than her excellent wardrobe choices bringing classic female rock energy reminiscent of a young Debbie Harry or Joan Jett, first performing acoustic at the festival on Thursday evening and later sitting in on Sunday with her father Steve Janevski’s band The Radio Sun.

“It was really surreal performing on stage with The Radio Sun but also with the one and only Paul Laine playing my own songs,” says Cassidy Paris.

The MelodicRock Festival officially kicked off on Friday, May 4, with Jaded Past featuring frontman George Becker, a veteran of the East Coast music scene delivering straight-ahead rock and featuring material from their Melodic Rock Records releases Believe and self-titled sophomore release Jaded Past produced by Trixter‘s Steve Brown.

Next on the bill was Fierce Heart featuring guitarist Rex Carroll from the legendary Christian Metal band Whitecross and the band King James.  Led by vocalist Robert Reynolds, the band was rounded out by Antonio Acevedo on Bass and Nick Forchione on drums.

“From my vantage point on the stage, I saw a beautiful community of people united in their love of rock and roll. No politics, no drama, just people who want to be elevated above the ordinary through a shared musical experience. What a tremendous honor for me, to get to know so many new friends – the circle is ever-widening. I can’t wait for the next one!” – Rex Carroll

A young quartet of New Yorkers, Station, formed back in 2011 by vocalist Patrick Kearney and guitarist Chris Lane were next. Joined by bassist Emi Asta and drummer Tony Baptist, bringing strong melody’s and youthful energy to their Friday afternoon performance, and hanging around to meet their fans afterwards for autographs and photos.  Apparently these guys had quite the rocky adventure traveling to the festival from the East Coast, but it is possible that their early morning karaoke at the hotel bar was even more memorable.

It was surprising to find a live DJ at the Crowne Plaza, but downright wrong to find him playing Vanilla Ice for a crowd full of rockers…for those who didn’t catch Station‘s vocalist nailing Miljenko Matijevic’s soprano on a karaoke-style rendition of Steelheart‘s “I’ll Never Let You Go,” here’s some video proof. He later closed down the bar with partner in crime Emi Asta and delivered Bon Jovi‘s “Ill Be There for You” Jon and Richie style, finishing a cappella when the sound got shut down and the lights came on.

Sweden’s Grand Design performed next fronted by Pelle Saether, and joined by guitarists Dennis Vestman and Janne Stark.  Stark best known for his time with Overdrive is also the author of The Encyclopedia of Swedish Hard Rock and Heavy Metal.  We’d only known of Volume 1, but when we caught up with Stark post-event at the hotel, he informed us that their are two more weighty volumes available these days (which we’d bet are well worth the price to ship them)!

Dennis Vestman tells The Pure Rock Shop about this, his second time performing at MelodicRock Festival in the US, “It was a kickass festival as usual.  Andrew [McNeice] rocks! The audience rules! Great people, miss them already. When we’re there, it feels we’re a family all together.”

Joined by drummer Joakim Jonsson and bassist Stefan Westerlund in support of their 2017 release Viva La Paradise, Grand Design will also play at MelodicRock Festival Scandinavia 2018, along with Boulevard, Treat, Crazy Lixx and FM and many others at the end of May, in Sweden.

Next up was an electric performance from legendary performer and songwriter Jean Beauvoir who was joined for the first time live with metal guitarist Jack Frost of Seven Witches, and it turns out the experience was just as memorable for Jack as it was for those lucky enough to catch the show:

“This past weekend, I was truly blessed to have played at the Melodic Rock Festival in Chicago with Jean Beauvoir and his band.  I don’t even know where to start…it was an amazing experience.  The very first thing that needs to be said is that Jean Beauvoir is a music legend and nothing short of a class act, and just saying ‘thank you’ to him seems too small. This man is the definition of an artist, and the fact that he gave me the opportunity to play on the same stage as himself was an honor. I can’t say enough about him that describes what an icon he is. This man can hear when a note is flat, when you’ve picked up instead of down, or when a riff is just a tad off. He is a musicians musician,” says guitarist Jack Frost.

“What a roller coaster ride! I had about 2 weeks to learn the songs Jean sent to me, and I was so psyched to get to work on them…I literally dropped everything else and basically locked myself in the studio to eat , sleep, & breathe the songs so I would have them down. Jean has an arsenal of music under his belt, and it’s all incredible stuff.  Was it a lot of work? Hell yeah, but these tunes were a pleasure and worth every minute of the time I put in, added Jack.

After I got to Chicago, it was pretty much right back in the studio again, only now it was with Jean and the rest of the guys in the band, and man, all I have to say is wow!  We spent hours in the studio jamming together tweaking and adjusting parts, until we had them nailed down tight.  They were all totally amazing to me as I was finding where I fit in with them and while we went through the songs during the last few days before the show. Beauvoir & his guys represent what every musician should be, the talent and professionalism is unreal. Tommy is such a well rounded guitar player and was so generously helpful to me with all the guitar parts, not to mention he’s so F’n funny.  Hawk, is a monster behind the kit- he knows like every drum style, & his timing, wow just like Big Ben lol.  And Dario? Man, he & I played together like we had been doing it years- it was such a natural connection. He plays like Sheehan, moves like Sarzo, and also has an awesome voice. And even beyond this, they are some of the greatest people I have ever met.

They welcomed me like a bro, and I can honestly say that no matter what happens from here out, they are now family to me. At one point on stage the other night, I looked over at Jean, looked around at the guys and the fans, and thought to myself, ‘This is like a dream come true…I’m doing what I love my whole life, and now I’m on stage with these guys…’ and in that moment, again, I knew why I do what I do for a living. So thank you so much to Mr Jean Beauvoir and the guys in his band for giving me the chance to not only have one of the best experiences in my music career, but also for validating my passion for music n playing,” he explained

As Jack mentions, Jean Beauvoir was joined by Crown of Thorns guitarist Tommy Lafferty and bassist Dario Sexias, as well as drummer Hawk Lopez who took us on a tour through Jean’s spectacular career treating us to favorites like “Are You Ready” from Crown of Thorns, and “The Awakening” by Voodoo X from the Shocker movie soundtrack, as well as rarities like “Uh! All Night” made famous by KISS.

After much anticipation, Sweden’s Treat performed an exclusive headlining engagement on Friday evening at the H.O.M.E. Bar with Robert Ernlund on vocals, Anders Wikström on guitar and vocals, Pontus Egberg on bass, Patrick Appelgren on keys, and Jamie Borger on drums.

Treat delivered a stellar set that opened with “Ghost of Graceland” and included favorites like “Paper Tiger” and “Roar,” and ended with the Dreamhunter medley of favorites like their international hit “World of Promises.”

The Pure Rock Shop was delighted to catch up with the band on Saturday relaxing by the pool at the Crowne Plaza in Northbrook, and have a quick chat with guitarist Anders and bassist Pontus about the Treat’s work on new material, and Anders’ side project ReVertigo with former Treat vocalist Mats Levén (Candlemass, Trans Siberian Orchestra).