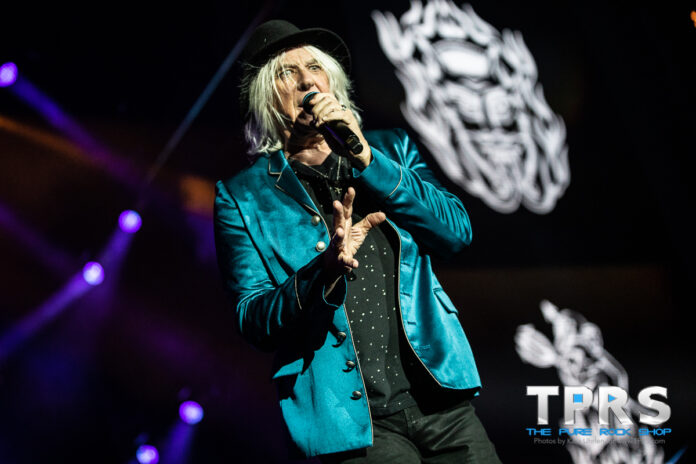 Who would have thought this day would finally come? I admit, I was a skeptic.  I wasn’t sure we’d ever see concerts as we knew them again, and certainly didn’t think a Stadium tour featuring Mötley Crüe, Def Leppard, Poison and Joan Jett would ever happen…but as we approached an precedented week of events here in Pittsburgh, the excitement started to build.

PNC Park first welcomed Billy Joel, then the Stadium tour, and for the trifecta of rock ‘n roll history in Pittsburgh, Metallica will be closing out the weekend.  With Mötley’s Tommy Lee show the world a bit more than most wanted to see on social media this week, and Metallica’s “Master of Puppets” topping the charts after it’s epic delivery on the Netflix blockbuster Stranger Things, there seemed no better place to be this weekend than Pittsburgh’s Northside.

It was an amazing day with fluffy white clouds and beautiful sunshine hitting our three rivers. So like many, we took a walk over the Warhol bridge to enjoy the view of the soon to be packed stadium from the distance just as you would on a game day.  Logistics seemed challenging given that the park staff isn’t well versed with hosting concerts, but we arrived early in anticipation and were lucky to catch an up and coming act called Classless Act, which took the slot originally intended for former Bitters’ frontman Tuk Smith & The Restless Hearts.

As the gates opened and guests made their way through security screenings, this Los Angeles based band took the stage offering a modern take on 70s rock and putting it all out there as the stadium began to fill in. They are said to be on a real trajectory nearing 1 million streams less than a year after launching their first single.  Their debut album Welcome To The Show was released this summer on Better Noise Music. Classless Act features Derek Day (vocals), Dane Pieper (guitar), Griffin Tucker (guitar), Franco Gravante (bass), and Chuck McKissock (drums). 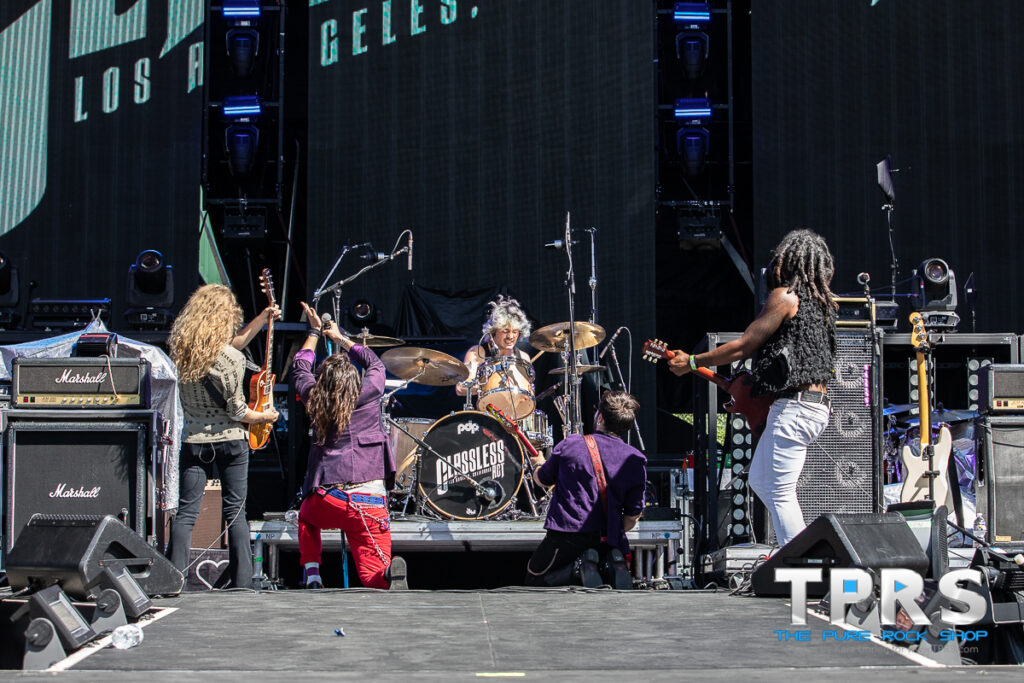 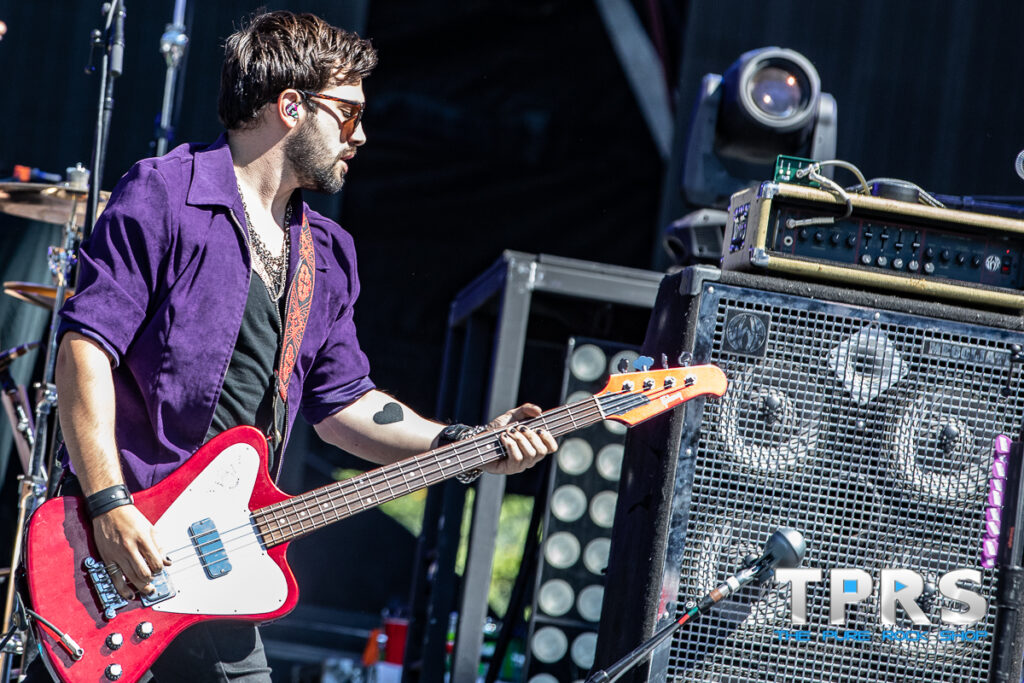 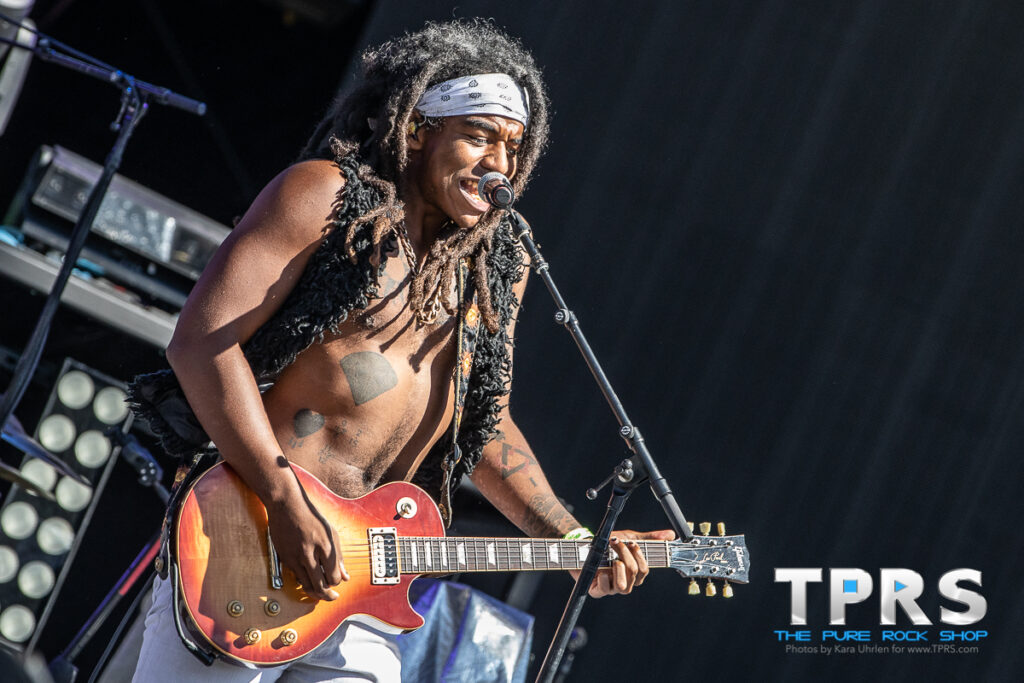 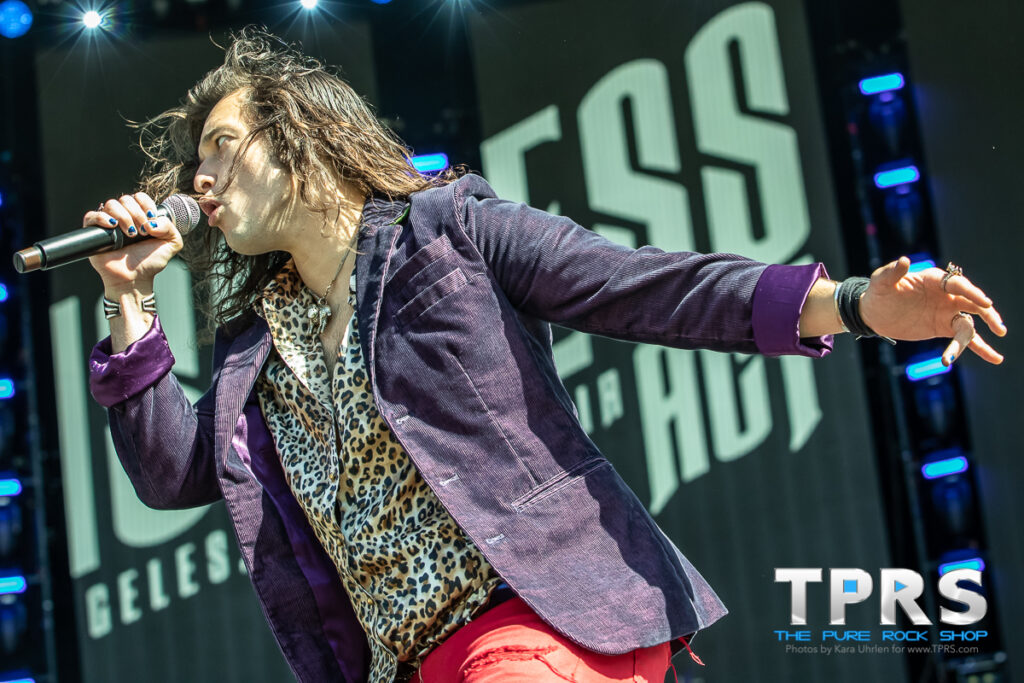 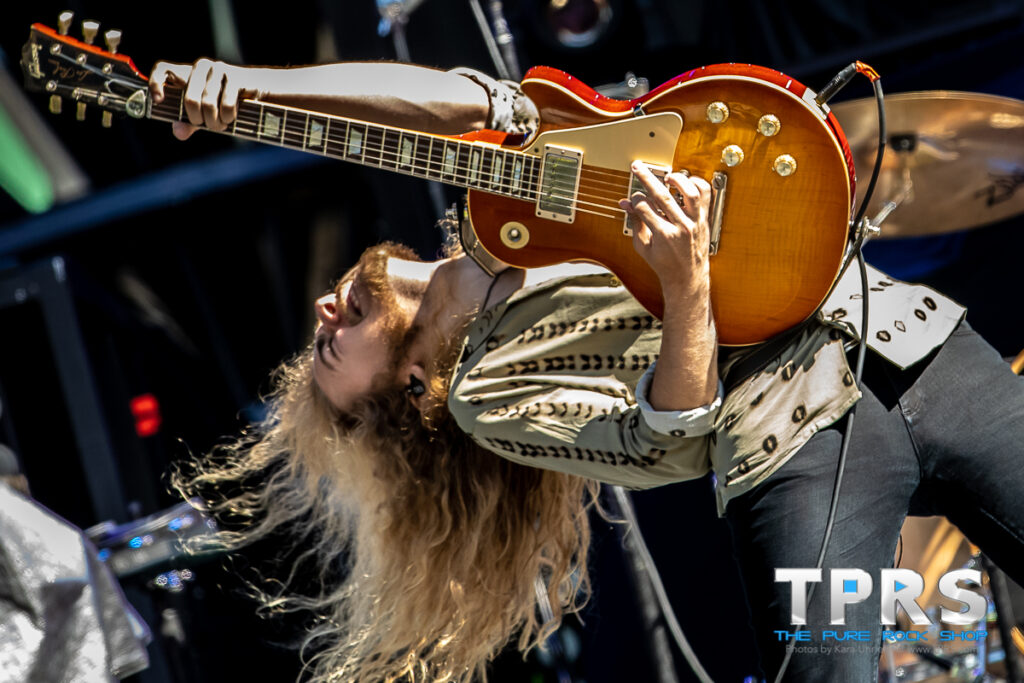 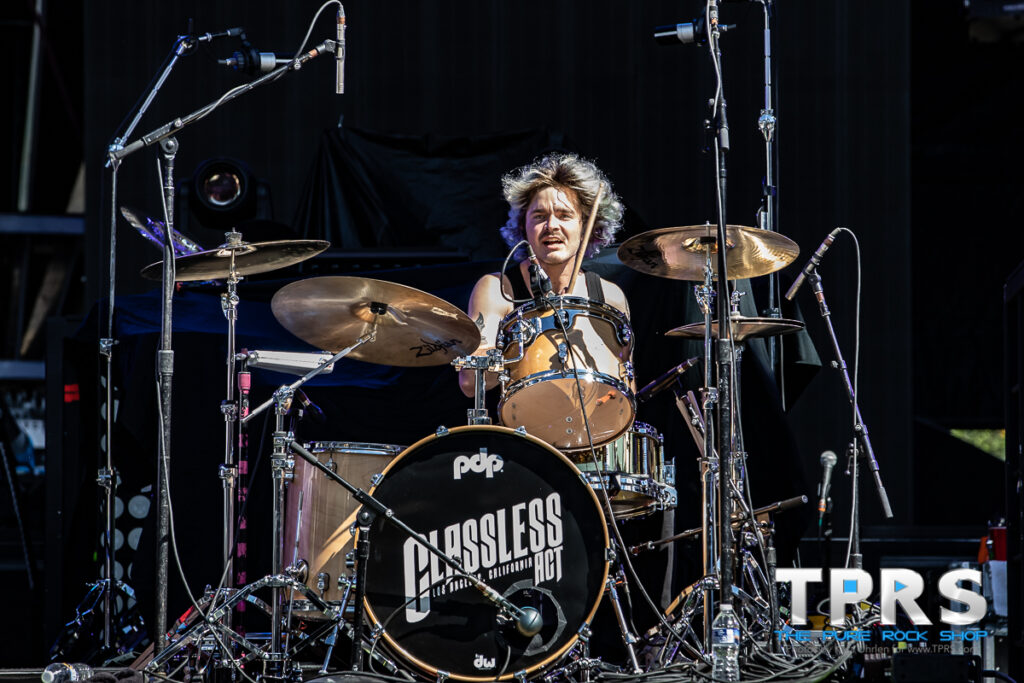 As the next band approached the stage, the sun was overwhelming, but that didn’t stop the crowd from pouring onto the field as the legendary Joan Jett & The Blackhearts brought us on a journey through rock ‘n roll history.

From the Runaways classic “Cherry Bomb” to her newly stripped down version of “(I’m Gonna) Run Away” from the band’s new acoustic album Changeup, legendary frontwoman, Joan Jett commanded our attention. In fact, as the crowd grew larger, it was surreal listening to the chants coming from the outfield seats as the Blackhearts entranced us with “Crimson & Clover” and rocked out on favorites like “I Hate Myself for Loving You” and of course, “I Love Rock ‘n Roll.”

One can’t help but applaud the accomplishments of Joan Jett as a pioneer who proved that a woman can front a band just as well as (if not better than) any of her male counterparts. 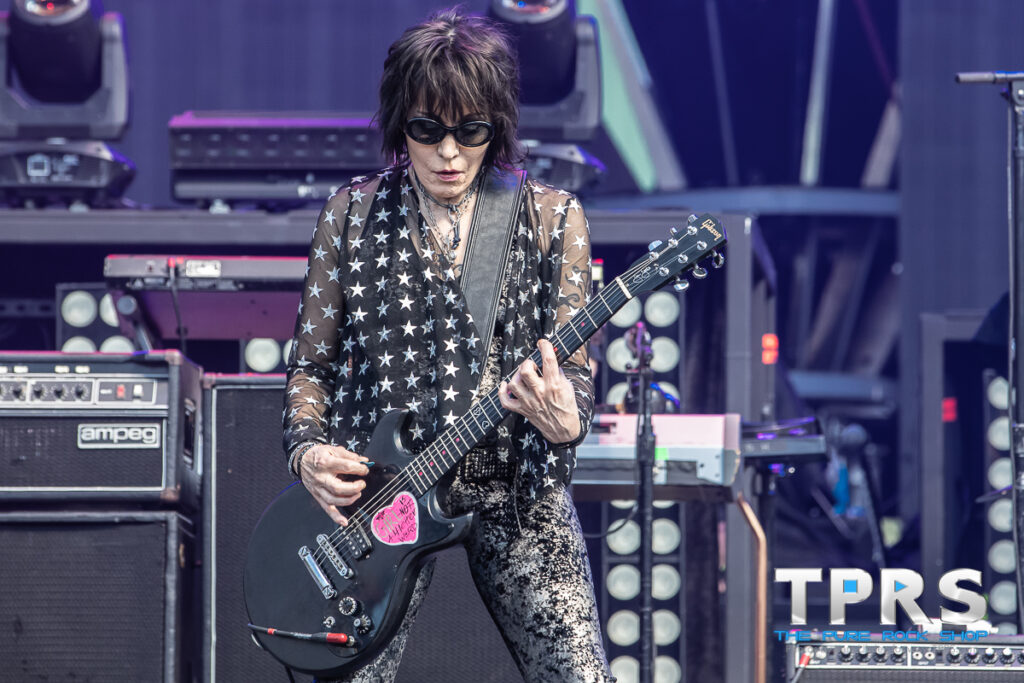 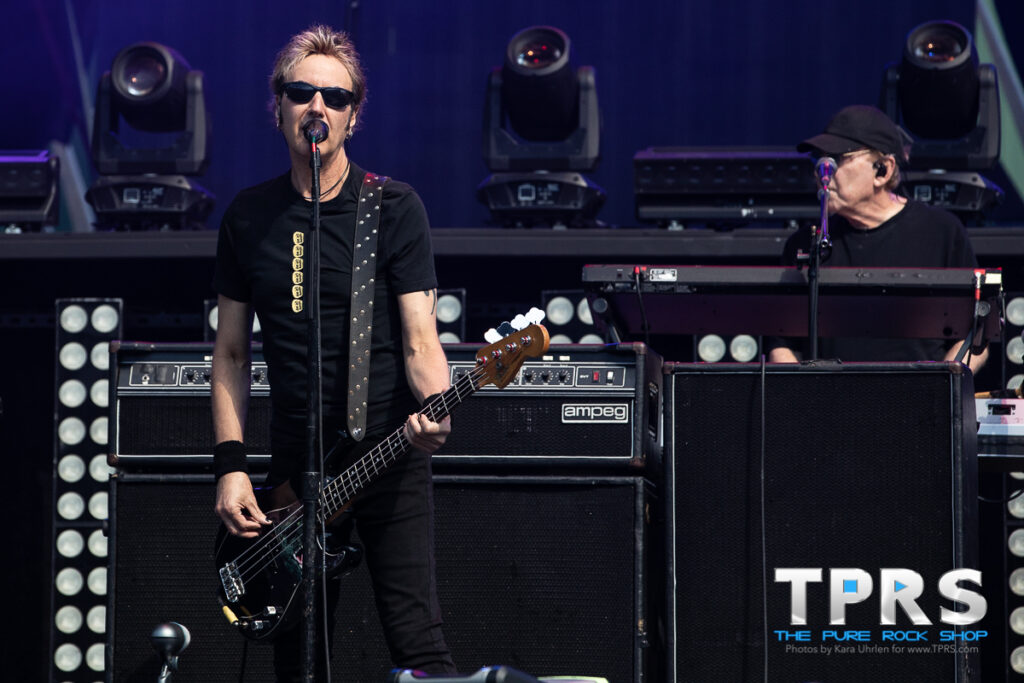 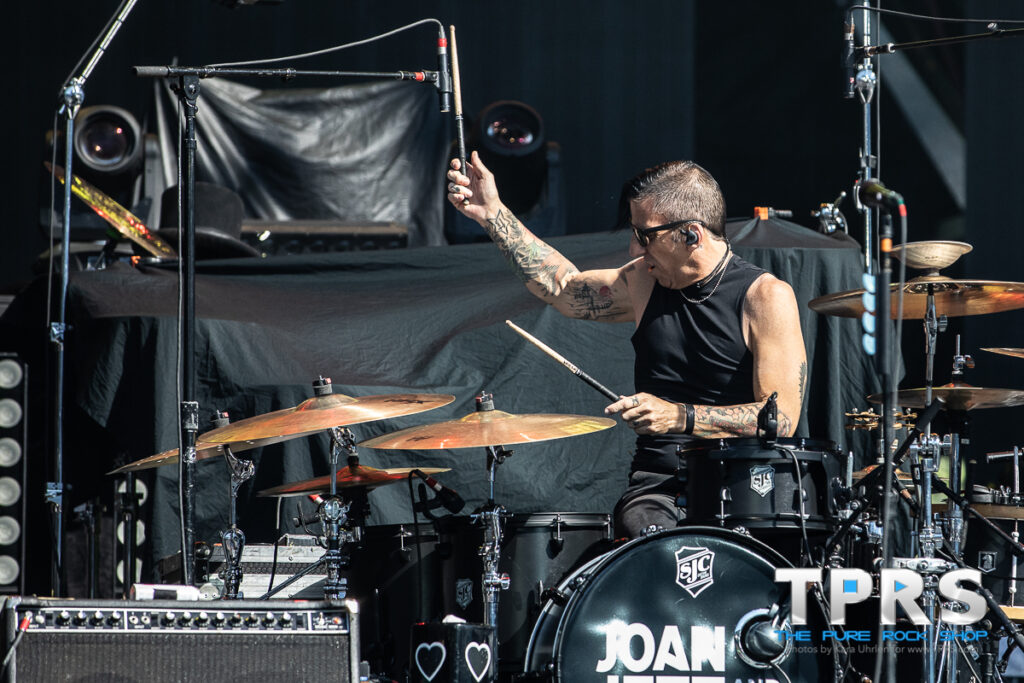 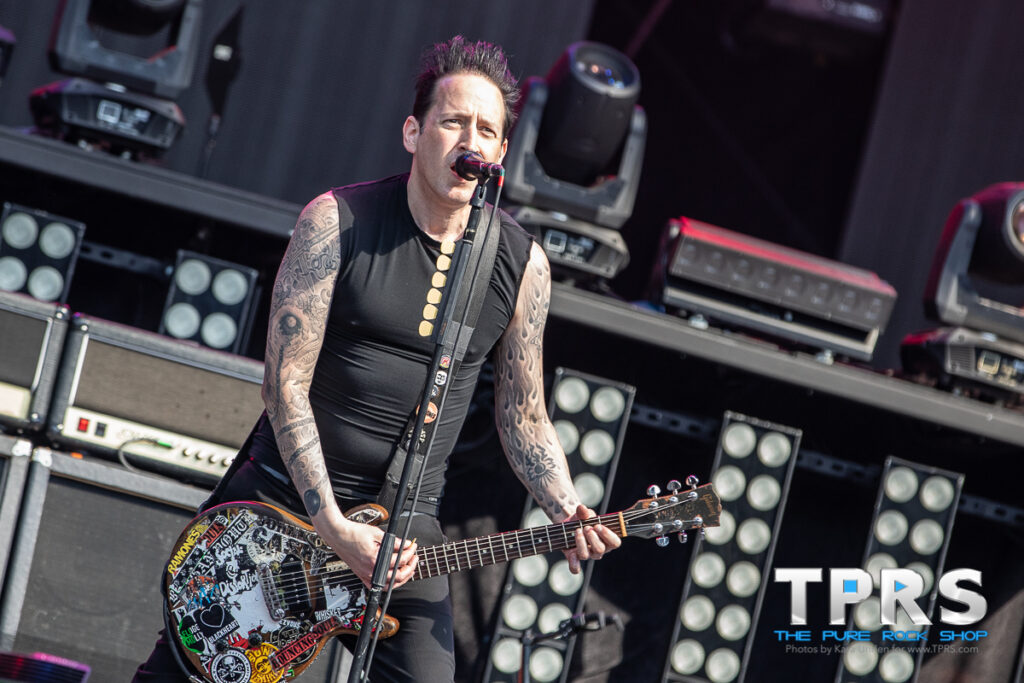 Just as we were reminded of her local ties by Joan Jett, Poison’s frontman Bret Michaels wasn’t going to let the opportunity to spin a terrible towel or hoist the Jolly Roger go to waste.  In fact, these Pennsylvania boys could be found bleeding black and gold throughout the set (Thank you Rikki Rockett for leaving me to explain what a “YINZER” was to my out of town guests).

I recently caught a Bret Michael’s Band show at the Hollywood Casino at Meadowlands, so I  kinda knew what to expect out of Bret , but I’ve gotta say the energy fueling the entire Poison band is something I’d like to bottle up.  They expressed pure joy for being part of this tour through both their words and their actions.  It was sincere appreciation for the opportunity and for their fans. The only thing missing from Poison’s set was more songs, and who wouldn’t want more of a good thing, right? 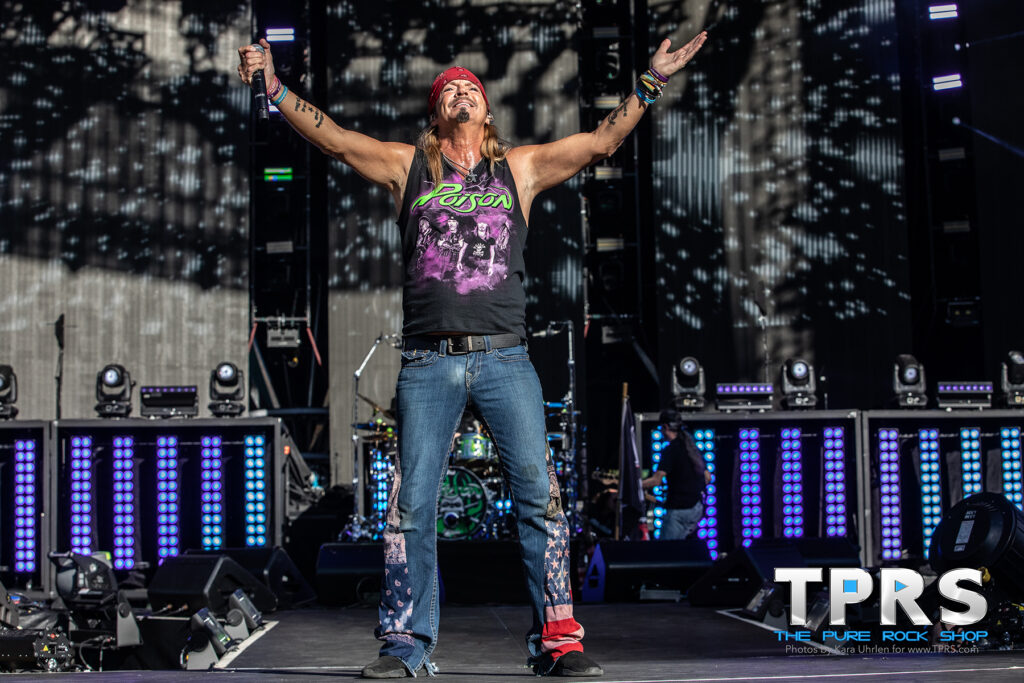 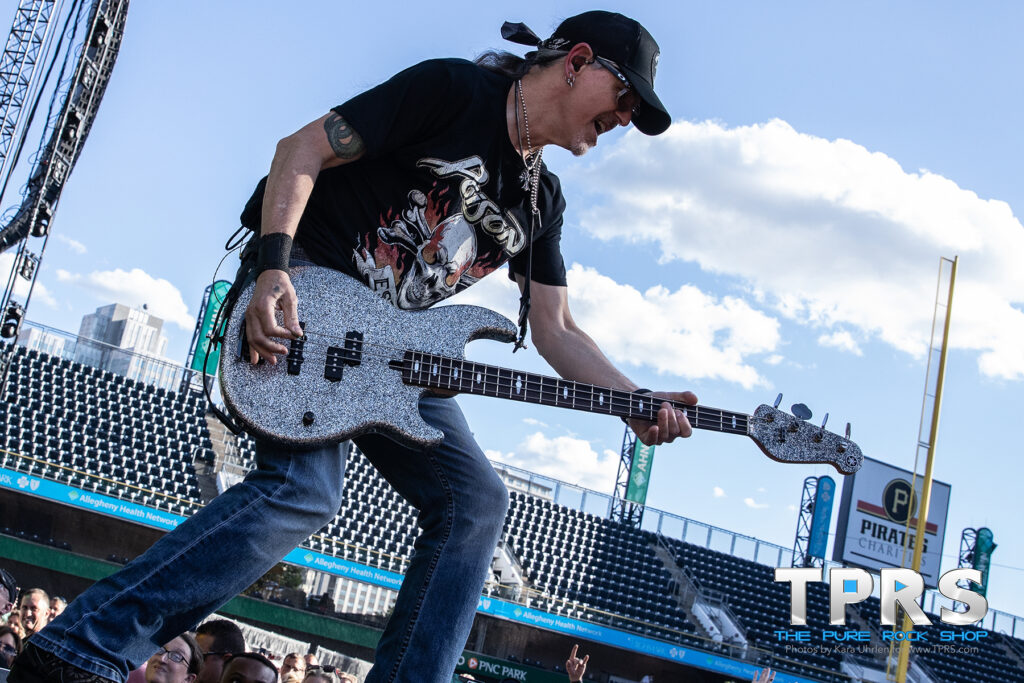 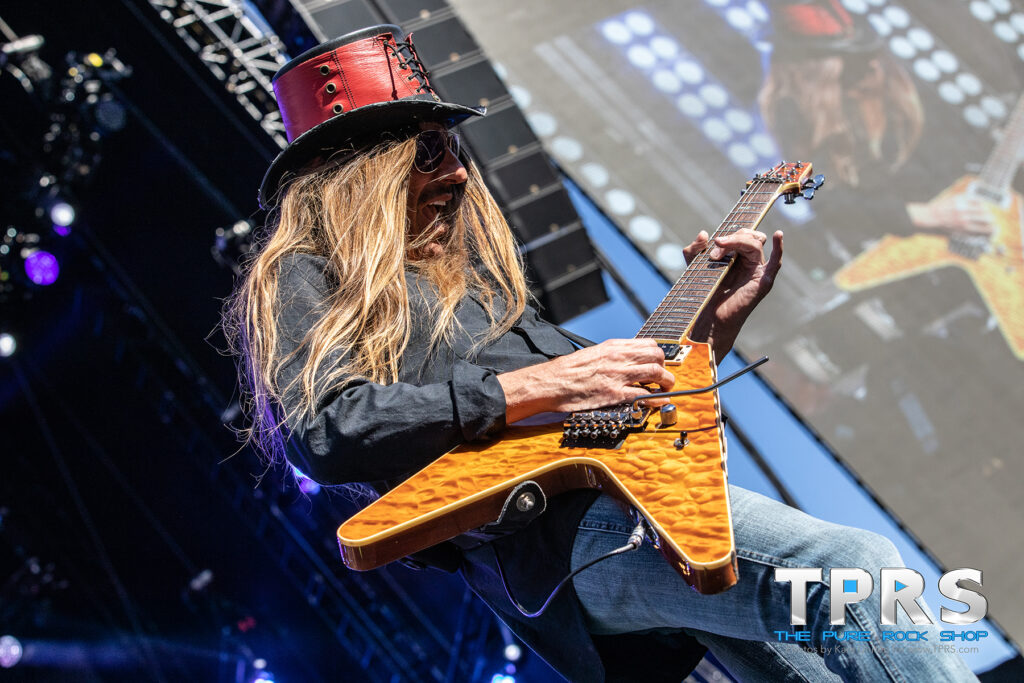 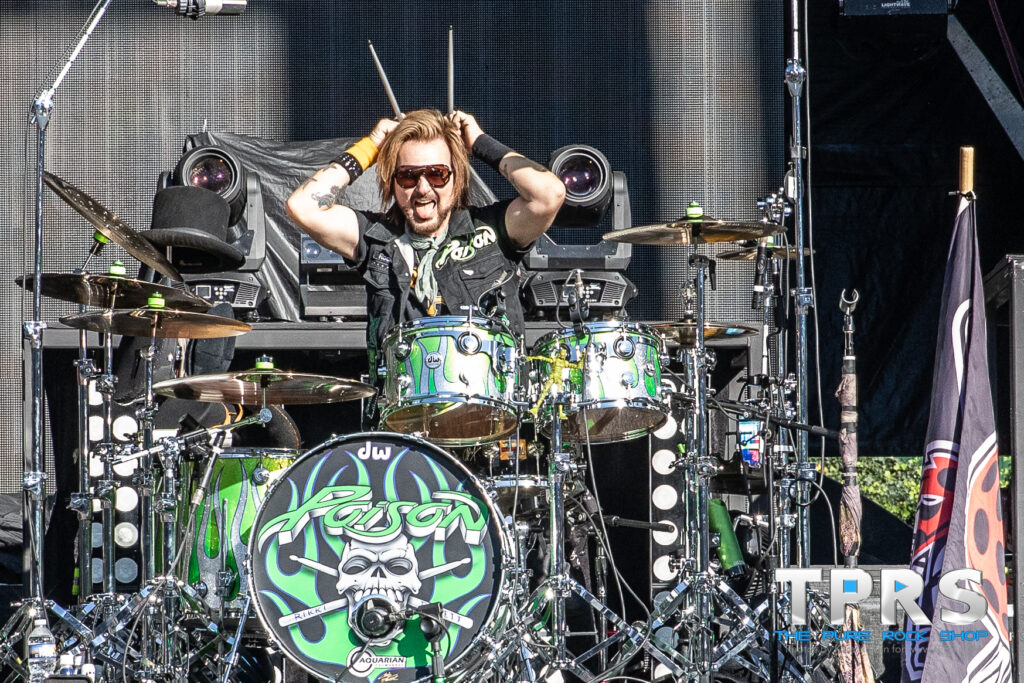 As Def Leppard’s Joe Elliott addressed the crowd, he spoke of the Stanley Theater, where the band played way back in 1980 with Judas Priest and the Scorpions. Given that I was four years old when that show happened, I can assure you, I didn’t make it.  But, I had once chatted with Joe about the theater and how beautiful he thought the venue was when he learned that I was from Pittsburgh.  The Stanley theater is now known as the Benedum Center for the Performing Arts and hosts other events like broadway musicals and some concerts just across the bridge from PNC Park, but clearly Def Leppard has outgrown the place.

Def Leppard was the band I was looking forward to the most.  For me personally, they were the band that introduced me to “my music.”  Sure, I heard Joan Jett and Mötley on the radio and could sing along to all the pop hits as a kid, but when Hysteria hit the charts and MTV, that was my awakening. I couldn’t get enough, I read every lyric in that cassette sleeve and listened to that tape more than anything I’d ever heard before.  And while I’ve met the band and photographed them very early in my career as a photojournalist, this opportunity was very special.  They certainly didn’t disappoint!

With a ninety minute set that hit hard on that album that introduced me to Def Leppard (and to hard rock), I couldn’t have been more thrilled.  These guys delivered all the hits and even offered up some new cuts from their new album Diamond Star Halos, “Take What You Want” and “This Guitar.” The later was performed along with “Two Steps Behind” in a somewhat stripped-down performance at the end of the catwalk where another drum kit emerged from the runway and the band got up close and personal with the crowd in the outfield.

Breaking the traditional first three songs rule, we had the unique opportunity to capture the last two songs in Def Leppard’s set, and the energy from the crowd was insane at our backs as they closed out the set.  I started to wonder if there was another show I could catch this summer.  So I’m telling you if you aren’t sure if you want to see the Stadium Tour, don’t over think it.  After all, the tour that seemed impossible is happening, buy the ticket! 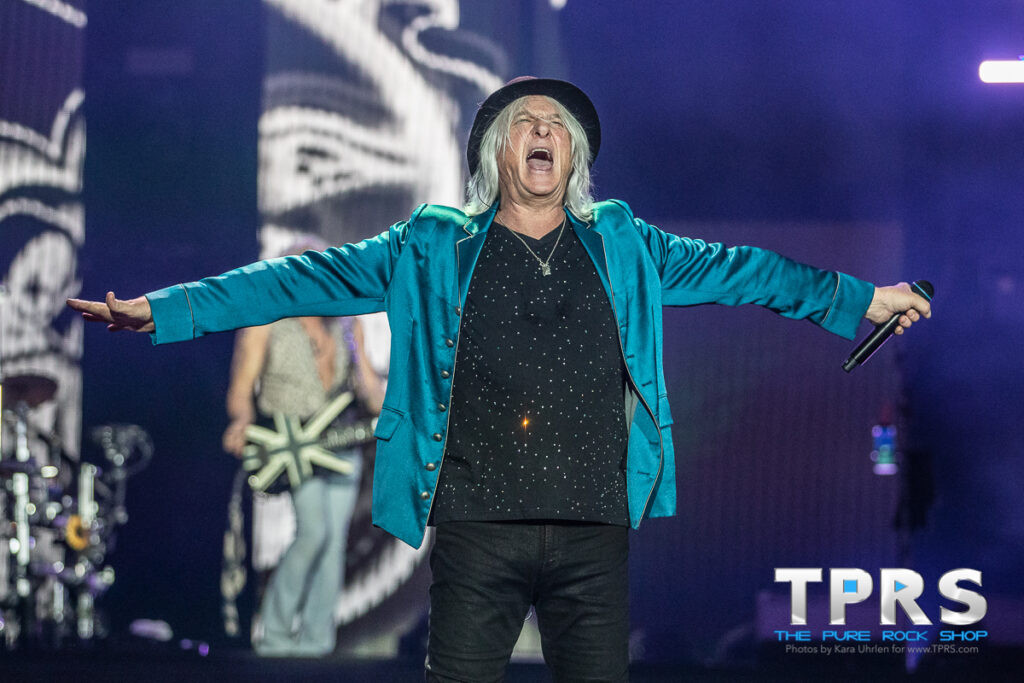 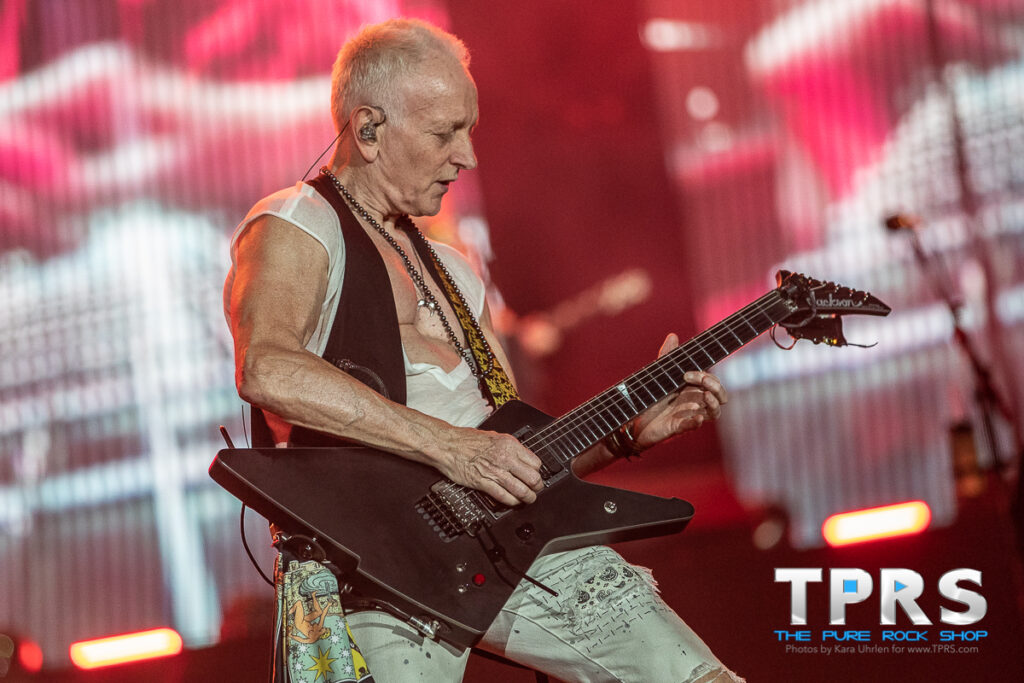 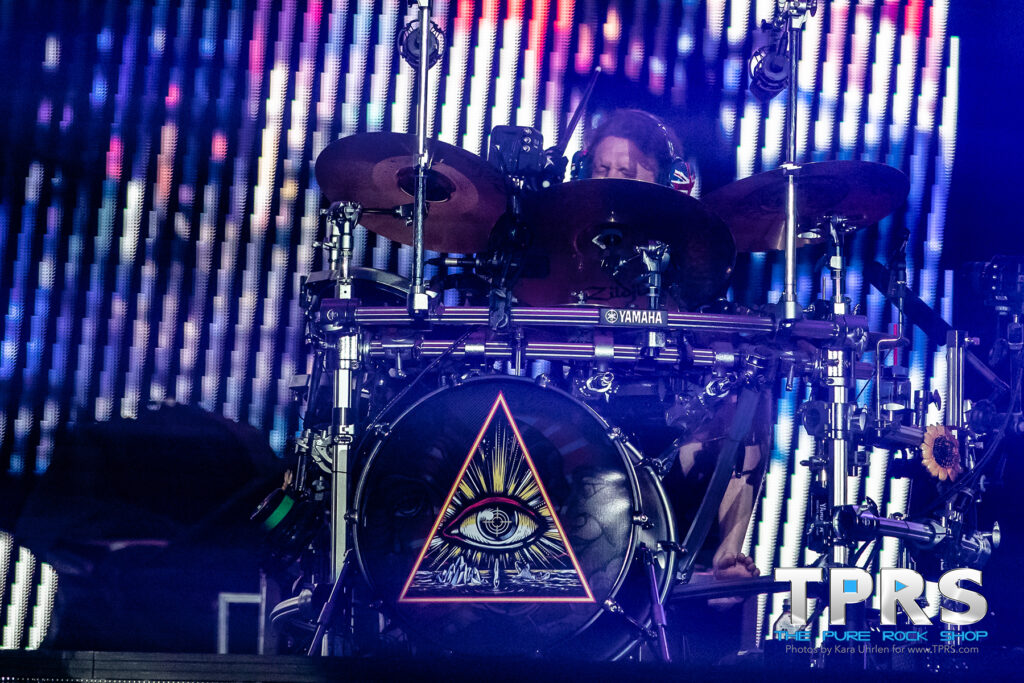 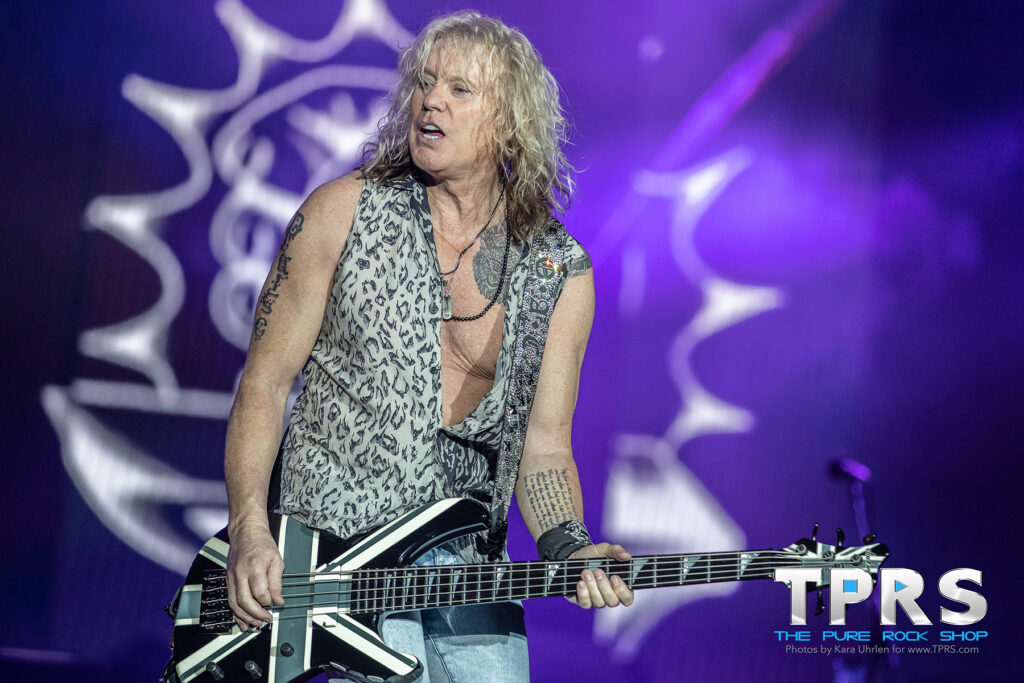 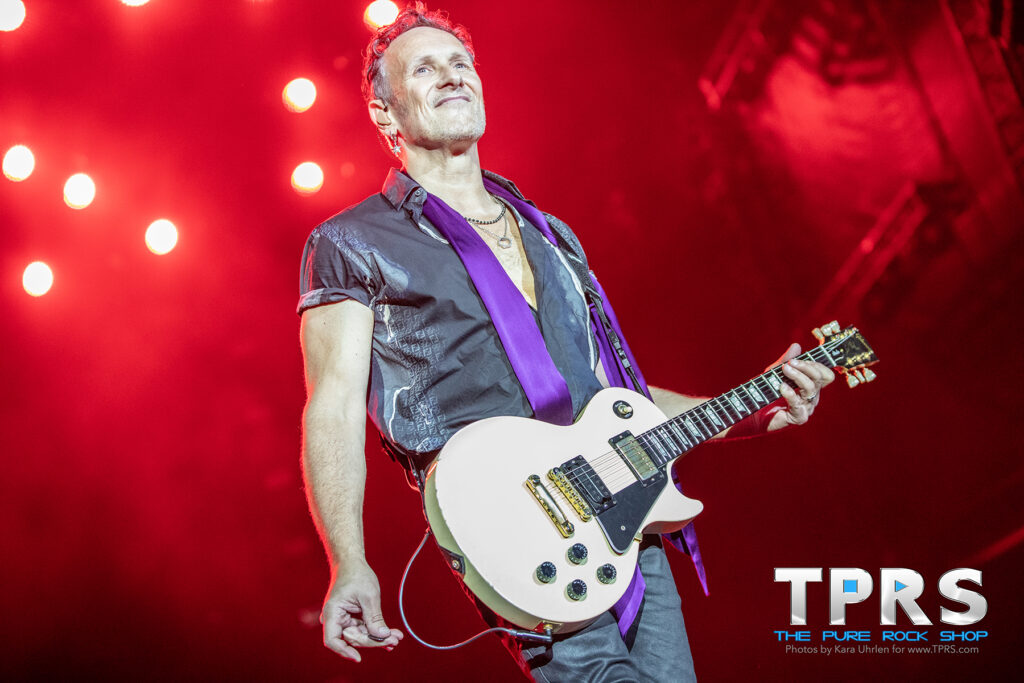 Holding the top billing at our show was Mötley Crüe as they swap the slot with Def Leppard, depending on the city. I wasn’t sure what to expect, as I’ve most definitely heard mixed reviews.  And honestly, everyone has been accurate.  These guys have an insane stage set-up, microphones hanging from the ceiling, steel cage round Tommy Lee and equally impressive steel microphone stands set up at the base of the catwalk for Nikki and Vince, the Nasty Habits pole dancing (and singing) throughout the show, and a piano that rises from the stage for the classic “Home Sweet Home.”

While my voice was wavering after singing my heart out during Def Leppard, I still found myself singing and dancing along to every Mötley Crüe song.  But there were certainly challenges.  Vocals were muffled and the distortion on the bass was beyond overwhelming from the floor.  Nothing new, but certainly hard to miss if you were sober.  But as I watched a crowd of people stumble out of the venue, I doubt many were.  What can I say, I loved the set regardless, from my all-time favorite “Too Fast for Love,” to the new song from the movie, “The Dirt,” to the medley of cover tunes that Mötley Crüe made their own, it rocked! 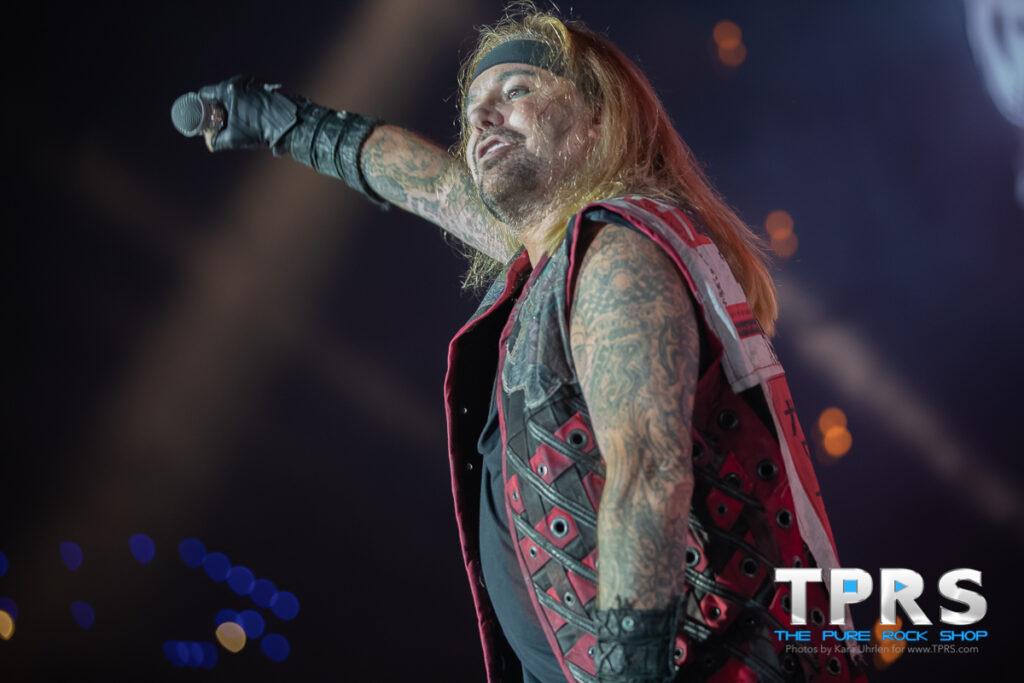 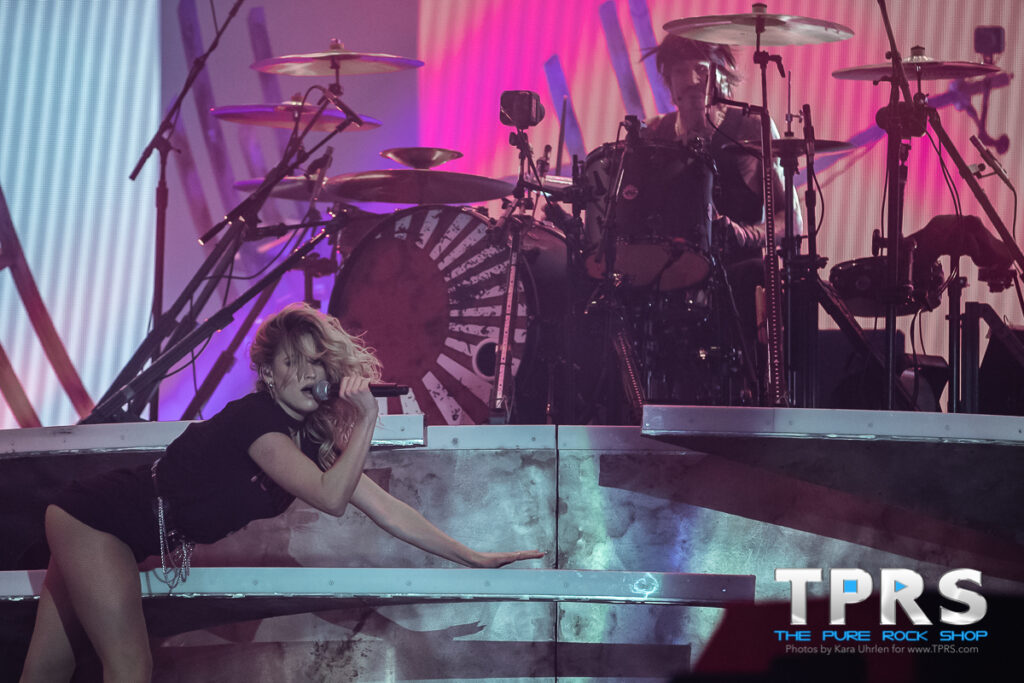 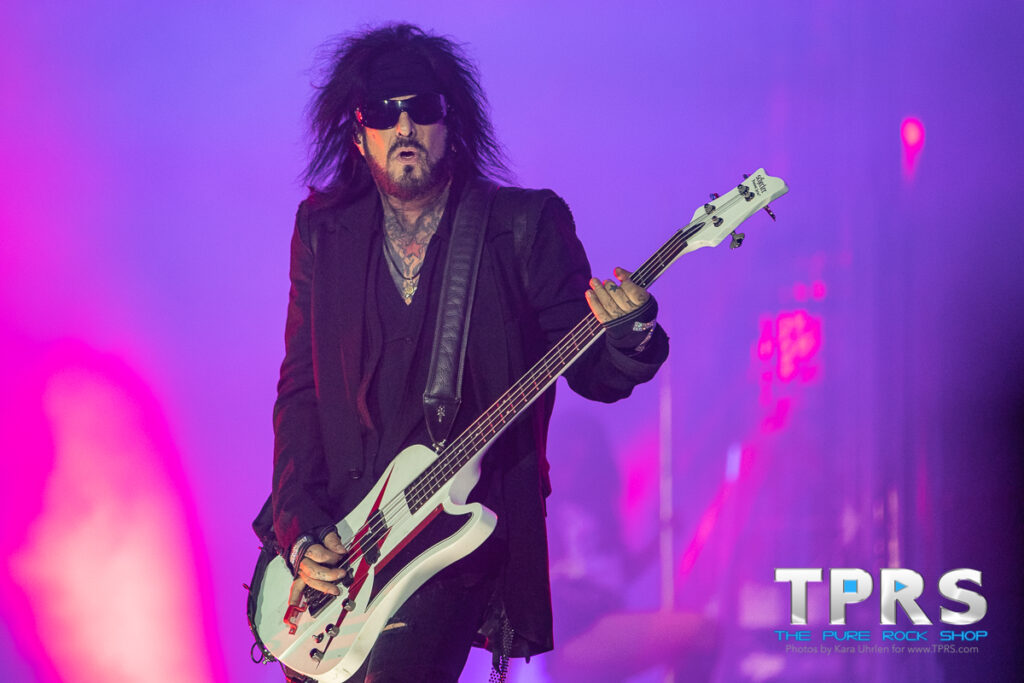 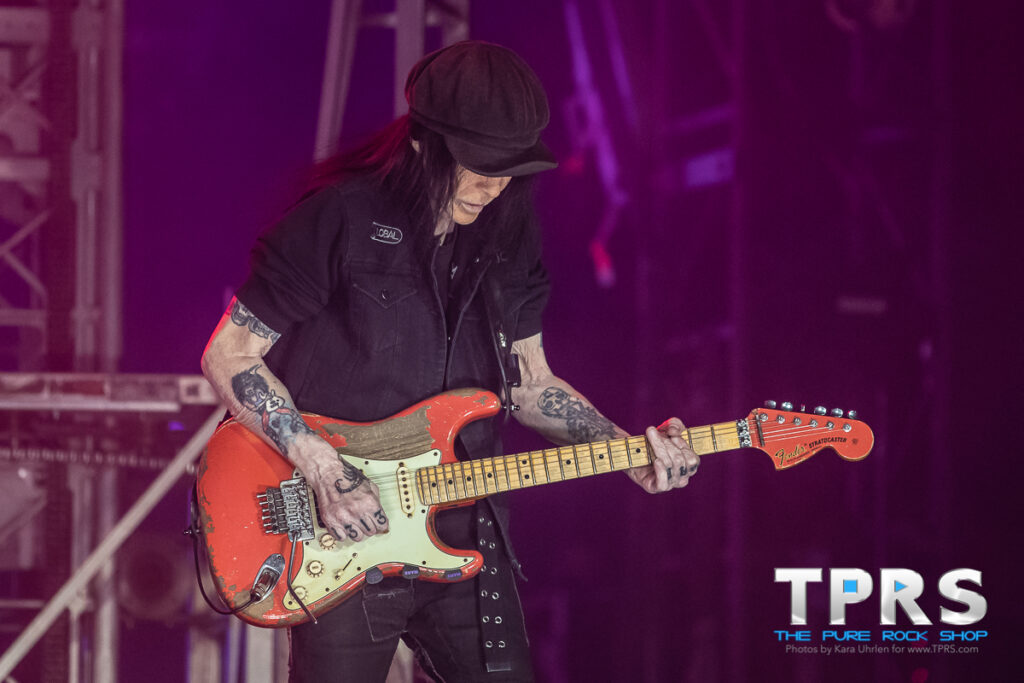