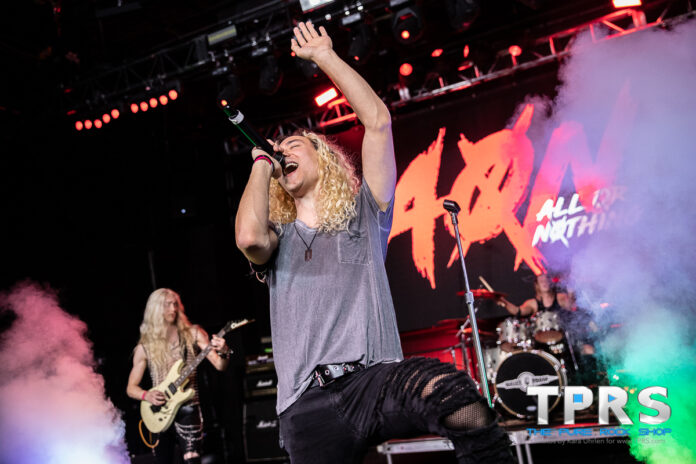 I can still remember sneaking off to a Brad Lee Entertainment event in Fort Lauderdale after working at the Monsters of Rock Cruise pre-party to catch my friends from Roxy Blue perform along with Kickin Valentina before sailing off to the Caribbean.

We were excited to grab some swag for Ballroom Blitz and had expected to see everyone just a few weeks later in March of 2020 for a showcase of bands like no other…I even talked to Brad after cruising about shooting the event and it was full speed ahead.

Then, life as we knew it halted and was followed with tragedy (and honestly that is an understatement at best as you recap the past couple of years). The event has been rebranded and relocated to Philadelphia’s 2300 Arena, an awesome venue that was a former home of wrestling ring events that now houses concerts, weddings, and more…

So, after a five-hour drive across my home state of Pennsylvania, I was ready to document every minute of it from Megan’s Backstage Bakery cupcakes to the Flirt dating app launch to stage repairs and logo malfunctions, we caught it all at Masquerade, starting with a showcase of new artists on Thursday evening:​ 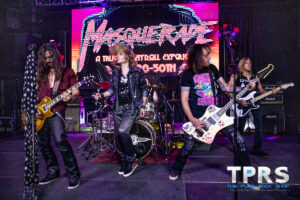 The artist showcase kicked off with the festival debut of Shotgun Superstars, who made me do a double take as they began their set with a personal favorite from the Swedish band Crazy Lixx that I instantly recognized, “Hell Raising Women.”

As I made my way into the festival and picked up my credentials, I listened in as they continued to cover more of my favorite Swedish bands like H.E.A.T. and Hardcore Superstar, and even did a tribute to a more local favorite, KIX. The band features front woman Annie Clark, along with her husband Scott Clark on bass, Stephen Polson on drums, and Victor Adriel and Erik Marz of Native Sons (who performed later during the festival) on guitars.

The two axe-men took the stage more than anyone all weekend, as Shotgun Superstars were somewhat of a house-band for the event with additional performances on Friday and Saturday. One of which included some fan participation in the spirit of Hardcore Superstar (for anyone who attended BLE’s Rocklanta, you know what I’m talking about).

Zenora, a local Philly rock band that describes themselves as highly-energetic (and who could disagree as we watched frontman Dylan Graff leaping over monitors and catching air as the band kicked off a heavy hitting set of original music.

Their influences may span decades but this was one of the younger bands from the weekend. Despite being in their early 20s, they have a couple EPs under their belts and can be found on your regular streaming service. As you look through the photos and video clips, your eyes are not deceiving you, this band boasts not one but two left-handed guitarists!


Those looking to relax a bit, took refuge with John’s Crossing, an inspiring six-piece band with a 70s vibe, lead by John Albino.

They are a christian Rock Band with a revolutionary goal. They are dedicated to living as disciples of Jesus Christ with a mission to guide others to salvation.

The band’s debut album was released in November 2016, and the inspiring lyric videos are available on YouTube at the link below.

MonteCarlo the band was one of two bands I was familiar with prior to the festival, having first met drummer Damian MonteCarlo with Match 22 on the Monsters of Rock Cruise.

Match 22, featuring members of Tantric had caught my attention for many reasons, including their stellar doo-wop performance at late-night karaoke.

So, naturally I’ve been watching the MonteCarlo band on social, and was excited to finally catch them in action. (I encourage you to checkout their links below as not to confuse them with the party band Monte Carlo that is also from Philadelphia).

Perhaps what took me by surprise about the band was not the music, but the delivery.  They are a heavy band with dark imagery around single releases like “Animal” and “Paradise Lost”. Then, when you look at frontman Albert Lapore, you see tattoos and a hard exterior, but this guy was dancing his ass off with an infectious smile as they rocked through a brief set.  They recently released an album entitled Super Double Fine.


So, people often tell me that I know everyone, and when you literally have thousands of friends and acquaintances that come and go in this business, it can get challenging to keep track.  I tell you this because this merger of frontman Rob Kane (Apocalyptic Lovers) and Mike Floros (SteelCity) took me by surprise.

You see Rob’s band, (formerly know as Love & War) was one of the very first bands that I ever interviewed on radio at Duquesne University’s student radio station WDSR.  How wild to find myself capturing the performance of this new band decades later for my own publication that started not long after meeting Love & War drummer Dave Hope, who promises he has photo documentation of that classic interview in a box somewhere!

The music of the appropriately titled Love in Chains will take you back decades as well to a time when bands like Dokken and Europe were ruling the airwaves and MTV actually played music.  Check out their newly released album Everyday Heroes from Idora Entertainment at the links below. And look for our coverage of Mike and bassist Jason Cornwell’s other band SteelCity from later in the weekend.

Green Knuckle Material describes themselves as a Bergen County New Jersey Based Indie Rap Rock Band, which left me wondering if we would be getting something like the Beastie Boys?? But, honestly I’m not really sure how to describe their eclectic sound, though rap didn’t seem fitting.

“It all started in the basement” is their saying, and I can see why they say that they have created their own unique sound.  Check them out for yourselves.  Links below.

The evening continued with powerhouse trio Whiskey Grin is one of nearby New Jersey’s hottest original rock n’roll bands featuring frontman Jim Mayberry on guitar and vocals, John Tidwell on bass, and Dreem on drums. 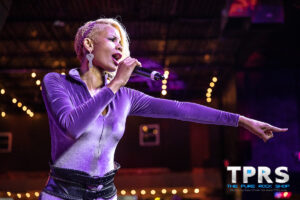 Nitro Nitra’s is a rock artist from Wilmington, Delaware who’s performance was short but by far one of the highlights of the evening.

As Brad Lee had indicated in our pre-event interview, this amazing new talent had performed the song “Train” for NBC’s American Song contest.

She is described as performing Astral-Pop. Call it what you will, but what I heard was a very versatile front woman with pipes like Janis Joplin and moves like Tina Turner. I hadn’t known that she was going to shake the stage at it’s core, but after watching this girl ditch her stilettos for a pair of Doc Martens, I had been beyond thankful that the stage catwalk (which was mobile during our last photoshoot) had been manually secured by stage manager Scott Schacht and host Jay Oakley at my request, just prior to her performance. From opening the set with Led Zeppelin to swinging beats reminiscent of the Stray Cats, calling her set versatile is an understatement.

Check out our interview with Nitro Nitra discussing Masquerade and what’s on the horizon for her.

Frontman James Ryder tell us that it “Felt great to be back in Philly, and we’re happy to do so with Brad Lee and the crew at BLE.”

All or Nothing was another band that I’d been somewhat familiar with having caught members Ian Smith (bass) and Jacob Mann (guitar) filling in with XYZ at the M3 Rock Festival this past May.

But, this was my first time catching the full band live.  They took the headlining spot originally slated for Michael Grant (Endeverafter, LA Guns), and gave a rock star performance with a full light show, fog, and the energy one would expect from such a young band.

These guys are just getting started, and I for one am excited to see where they go. You can check out their music on Spotify https://open.spotify.com/album/3UcKggE12RQBhmf9Jvg4uR?si=riAokdiGR6ecYkSGIVQEFw and social links below, including a video introduction to the full band.

I’ve included links to the artists featured in the showcase so that you can check out new music and help our rock ‘n roll family grow.  I also encourage you to follow us @ThePureRockShop on Facebook and Instagram for local show coverage and festivals like the Monsters of Rock Cruise and M3 Rock Festival, additional coverage from Masquerade, and the upcoming Monsters on the Mountain festival.