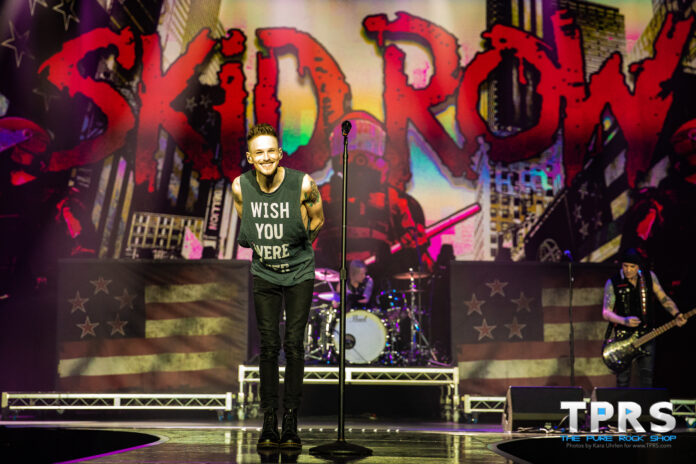 Sometimes things happen for a reason.  While the original plan had been to see the Scorpions and Queensryche over the Fourth of July holiday in 2020, Covid had other plans for the Sin City Nights Vegas Residency at Planet Hollywood’s Zappos Theater. The Scorpions were postponed until this month where they now have Skid Row on the bill as Queensryche has already committed to a tour with the mighty Judas Priest. 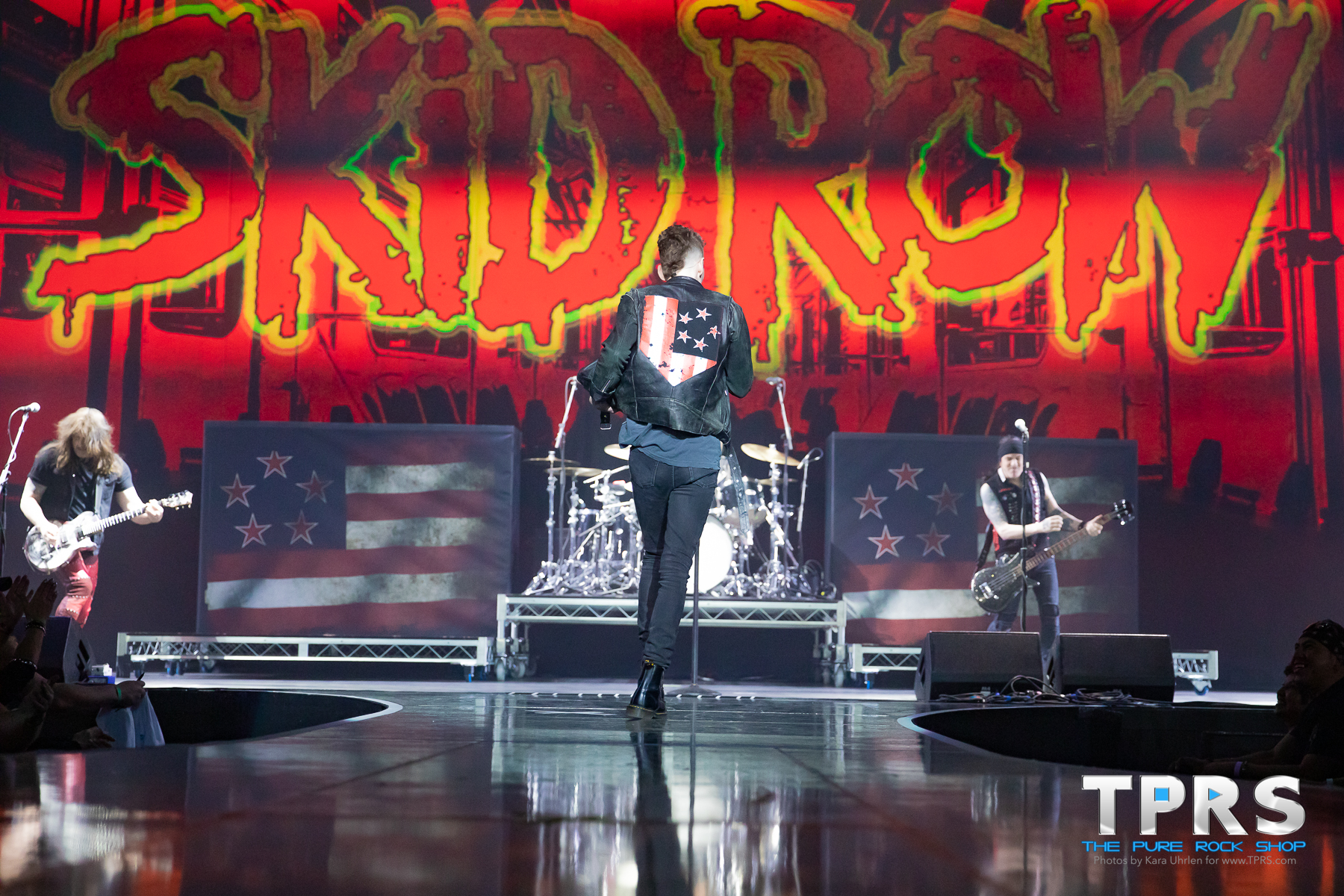 As an added bonus Foreigner is also doing a Vegas Residency at the nearby Venetian. So, when I caught up with Snake Sabo at Skid Row’s recent show in Jim Thorpe at Penn’s Peak, I asked if I could shoot the band again in Vegas.  Little did I know how big a request I’d made.  It turns out that plans to recruit former H.E.A.T. frontman and current New Horizon vocalist Erik Gronwall were already underway. In fact, Erik had been working on vocals for the new material from his home in Sweden. In the meantime, his other band New Horizon (with former H.E.A.T. bandmate Jona Tee) debuted on Frontiers and H.E.A.T. released a new single with original frontman Kenny Leckremo taking back the reigns.

The Skid Row line-up change was officially announced earlier this week, when Eddie Trunk debuted a new song co-written by Winger’s Paul Taylor called “The Gang’s All Here” with Erik Gronwall on lead vocals, which will be the title track of their new album due out on October 14 on earMUSIC. The album is available for Pre-order here.

Erik of course is joined by Snake Sabo, Rachel Bolan, Scotti Hill, and Rob Hammersmith.  And, Snake just smiled at me when I told him what a great decision they’d made choosing Erik.  And it appears that they agree as tours for the United Kingdom, Europe, and Australia have already been announced in addition to the Live to Rock tour with dates including Lita Ford, Winger, and Quiet Riot this spring and summer here in the states. For all info and tickets, go here. 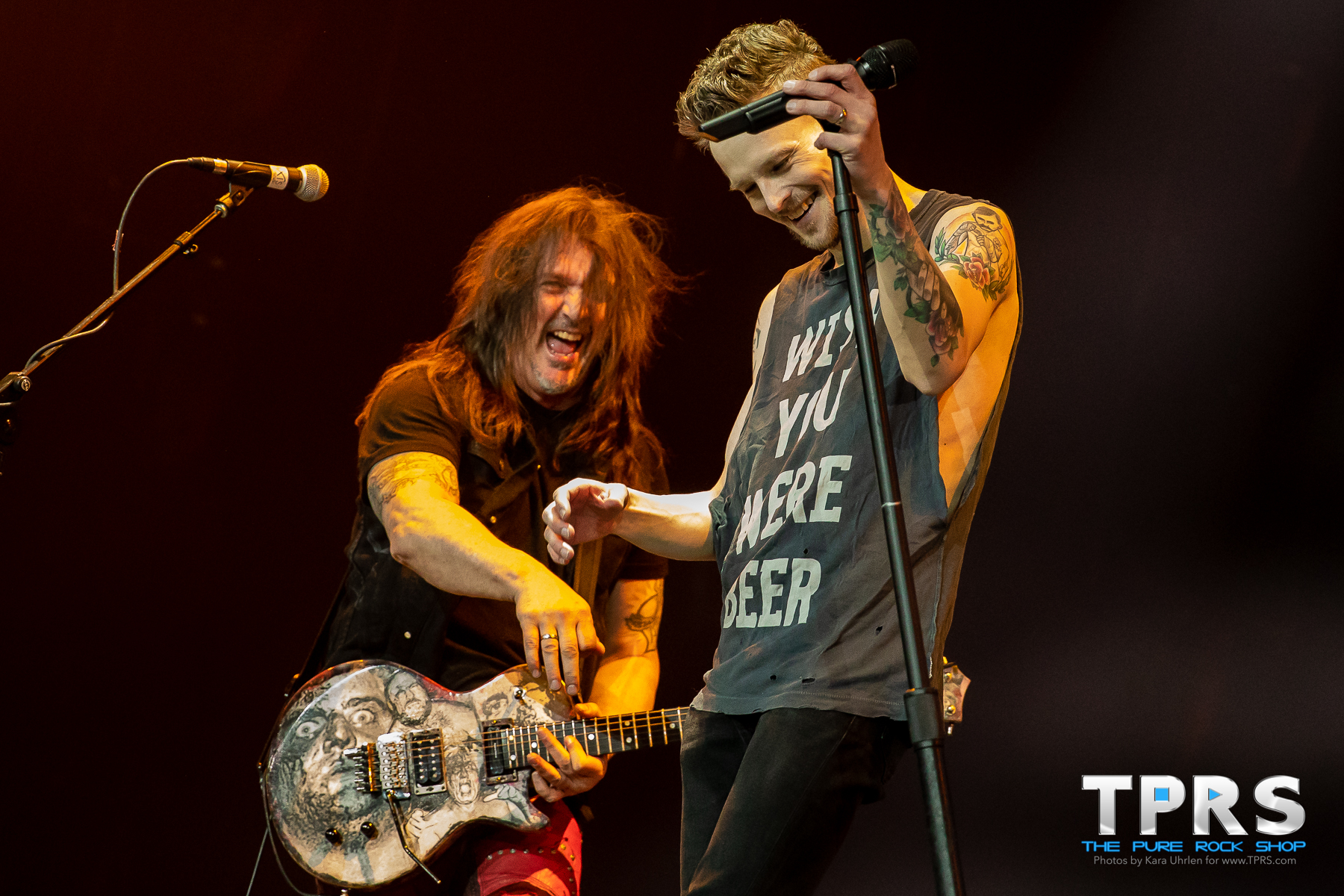 When I met Erik Gronwall in Chicago at Melodic Rock Fest back in 2018, I knew that he was destined for something bigger.  I’ve been quoted as calling him the next Billy Idol.  After all, this guy has all the key elements of of superstar. He is a phenomenal singer, a charismatic frontman, delivers more energy than anyone I’ve ever seen live, and he is still grounded despite his continued successes.

We did an interview poolside before I’d seen him perform, but I knew that I wanted to talk to Erik about Swedish Idol and Jesus Christ Superstar. I had been told by friends that he “tore the roof off” at the last festival.  They weren’t joking. I caught lots of video which you can find on our YouTube channel, because it seemed nearly impossible to catch his head banging mohawk on film in the dimly lit bar.

Fast forward to 2020 and H.E.A.T. makes their debut on the Monsters of Rock Cruise, where I had the opportunity to photograph them and fans during a photo experience session where only a minority of cruisers knew them.  Then, I watched as word spread about the band to see and the entire boat came to watch Erik climbing the stage and crowd surfing into the hot tub. Erik nearly knocked me down after the show when he left the stage and with that huge smile he asked “do you think they liked us?” As if the crowd at the show wasn’t enough, Erik and his H.E.A.T. bandmates received a standing ovation when walking into the main dining room that last night on the ship from a crowd that included many of their childhood heroes like Blas Elias and Doug Aldrich from Burning Rain. 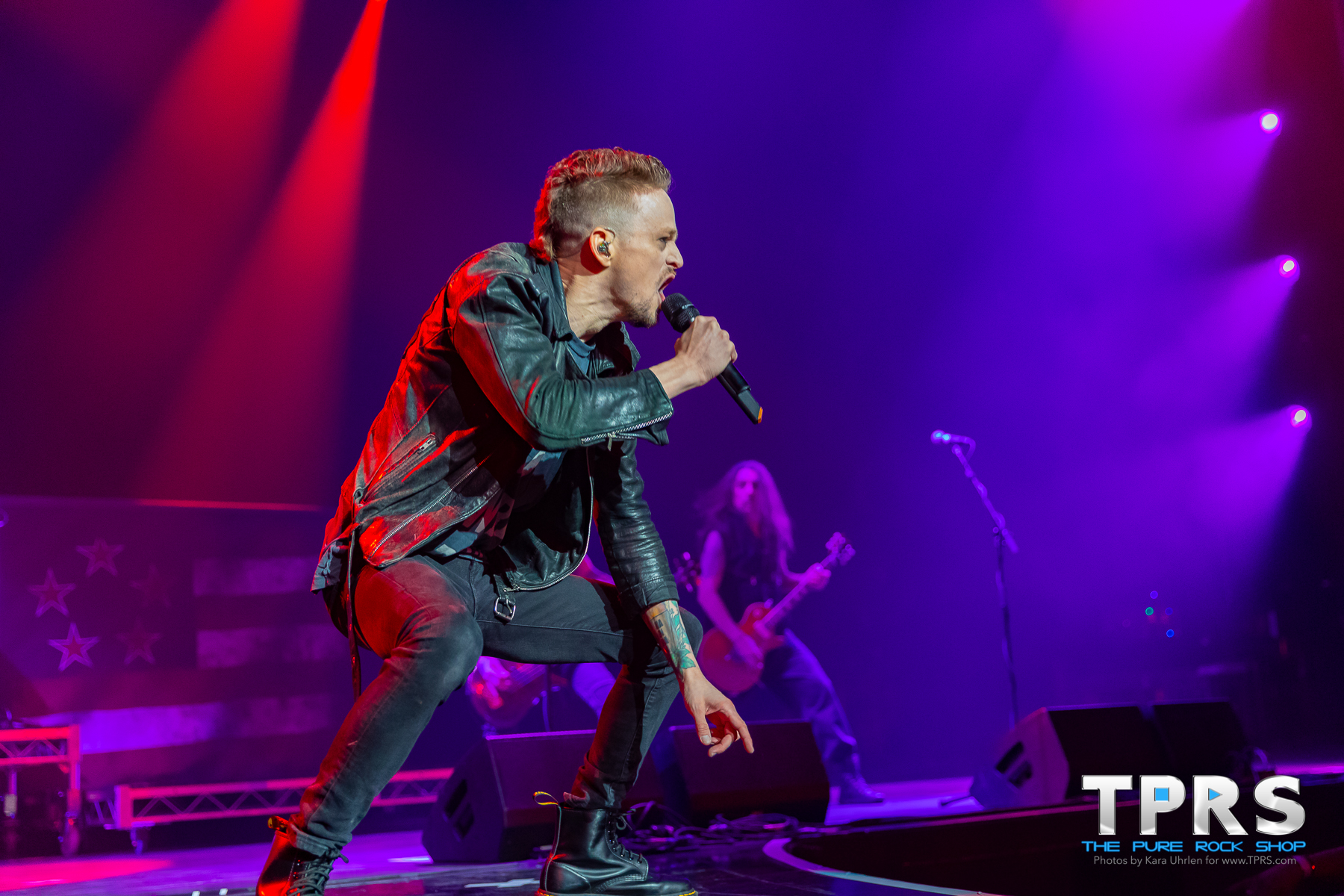 After seeing Erik depart from H.E.A.T. and struggle through a battle with leukemia that has left this little guy looking more like a teenager than a 34 year old man, it was surreal to watch. The guy that was singing “18 and Life” at karaoke, was now performing it live in front of 7,000 screaming fans in Last Vegas with the guys who wrote it!

It was a short set with Skid Row offering support to the Scorpions, just nine songs in all and no time for cover tunes or crowd surfing, but Erik still offered up his signature moves, leaving the stage to visit the crowd, jumping on tables, shadow boxing, and of course banging the mohawk that he’s already growing back.

His energy was infectious and I thoroughly enjoyed interacting with the band from the photo pit as apposed to shooting from the crowd last month at Penn’s Peak.  Scotti and Rachel were making faces for the camera, and I don’t think I’ve ever seen Snake smile so much on stage before. Like many I’ve been a Skid Row fan since the first album, and I’ve seen the band with Sebastian Bach, Johnny Solinger, and of course I’ve seen ZP Theart as recently as last month. But this is something special! 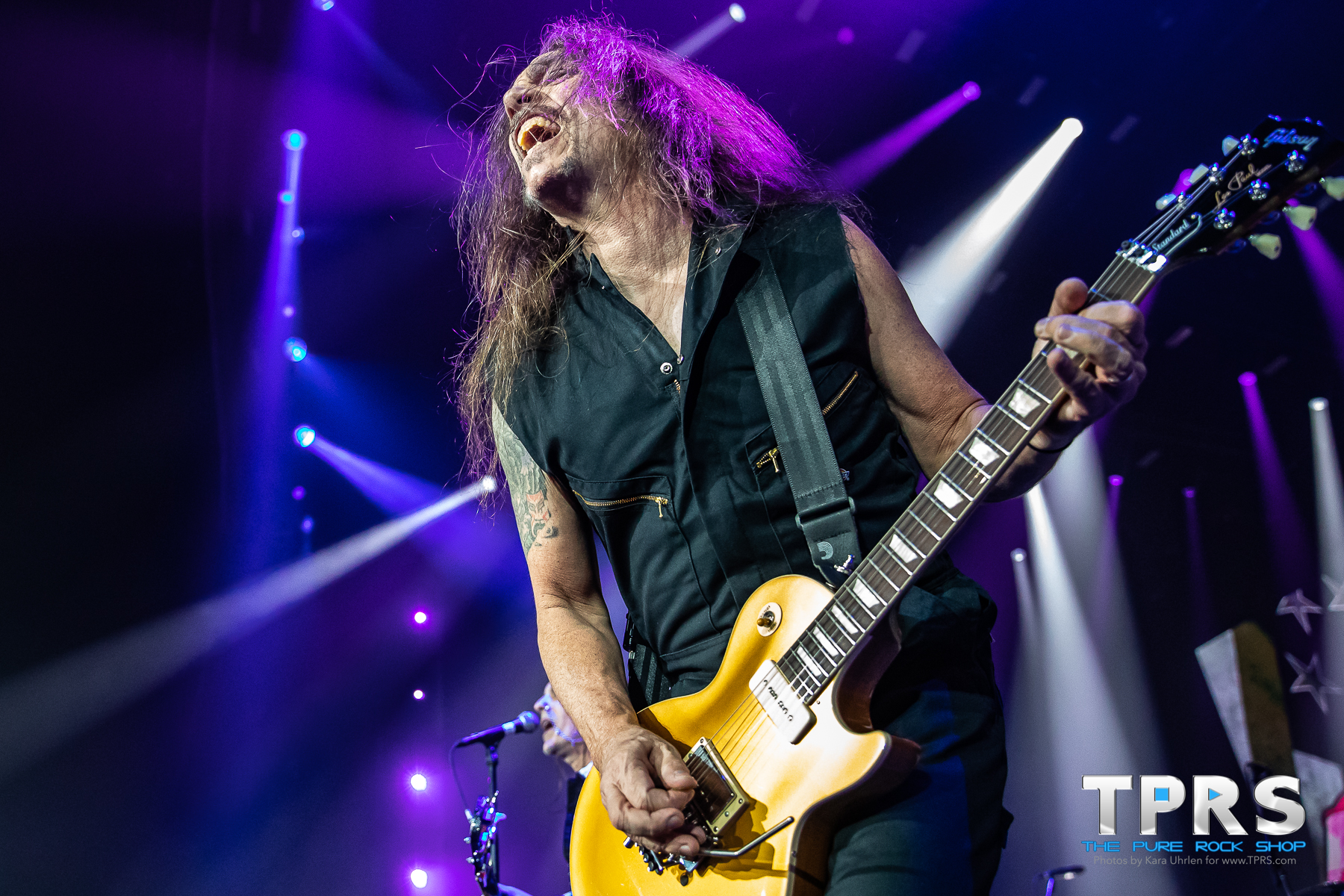 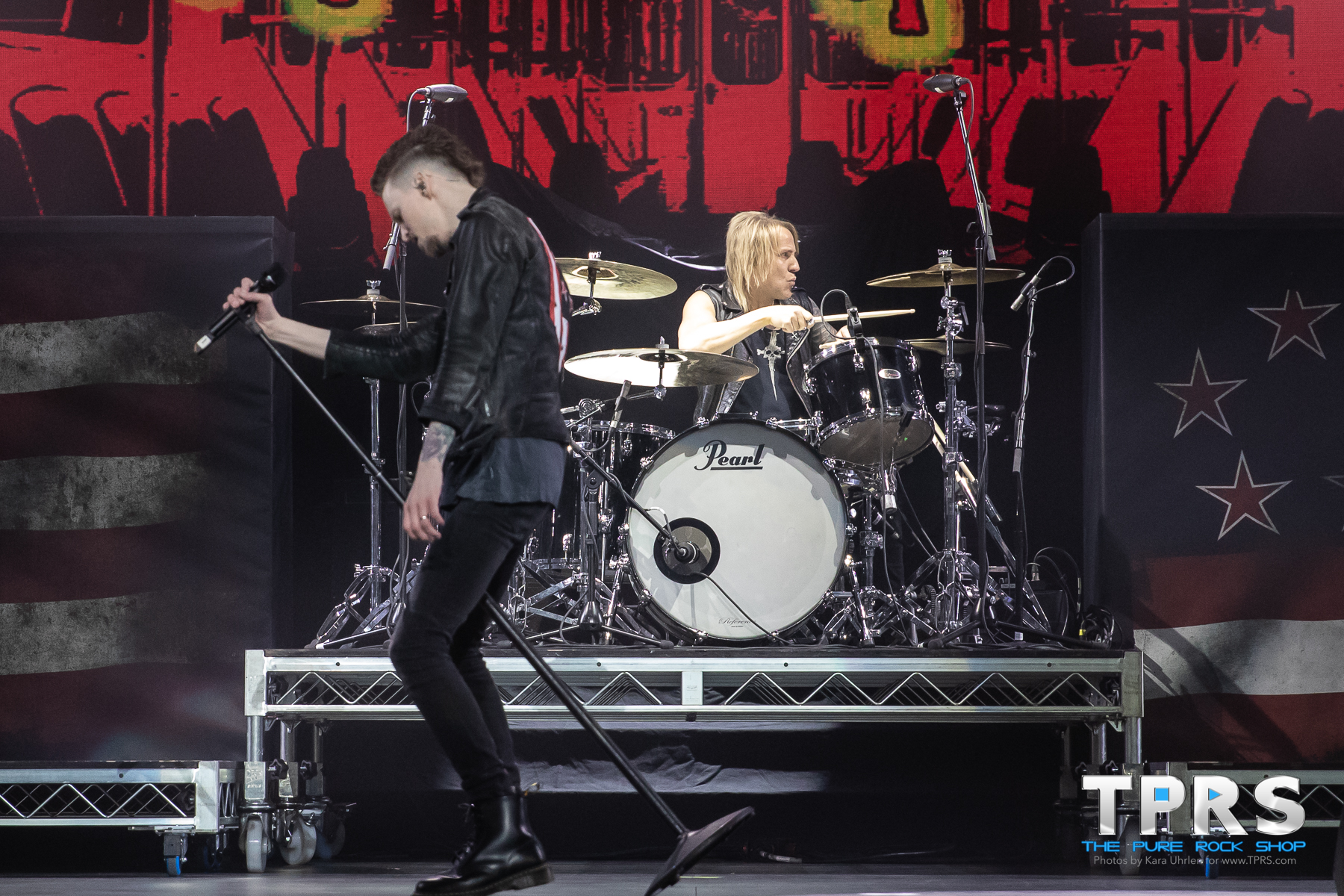 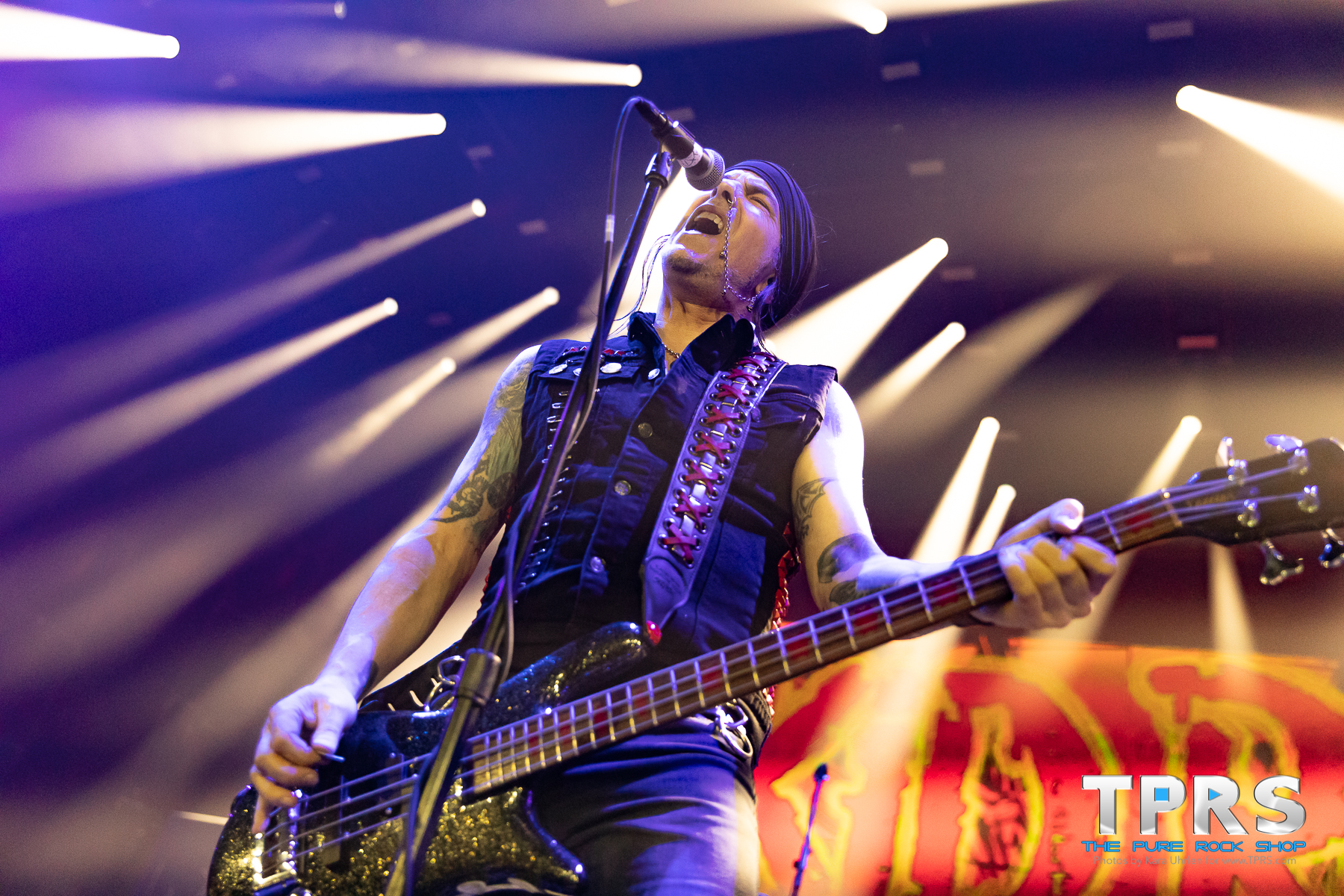 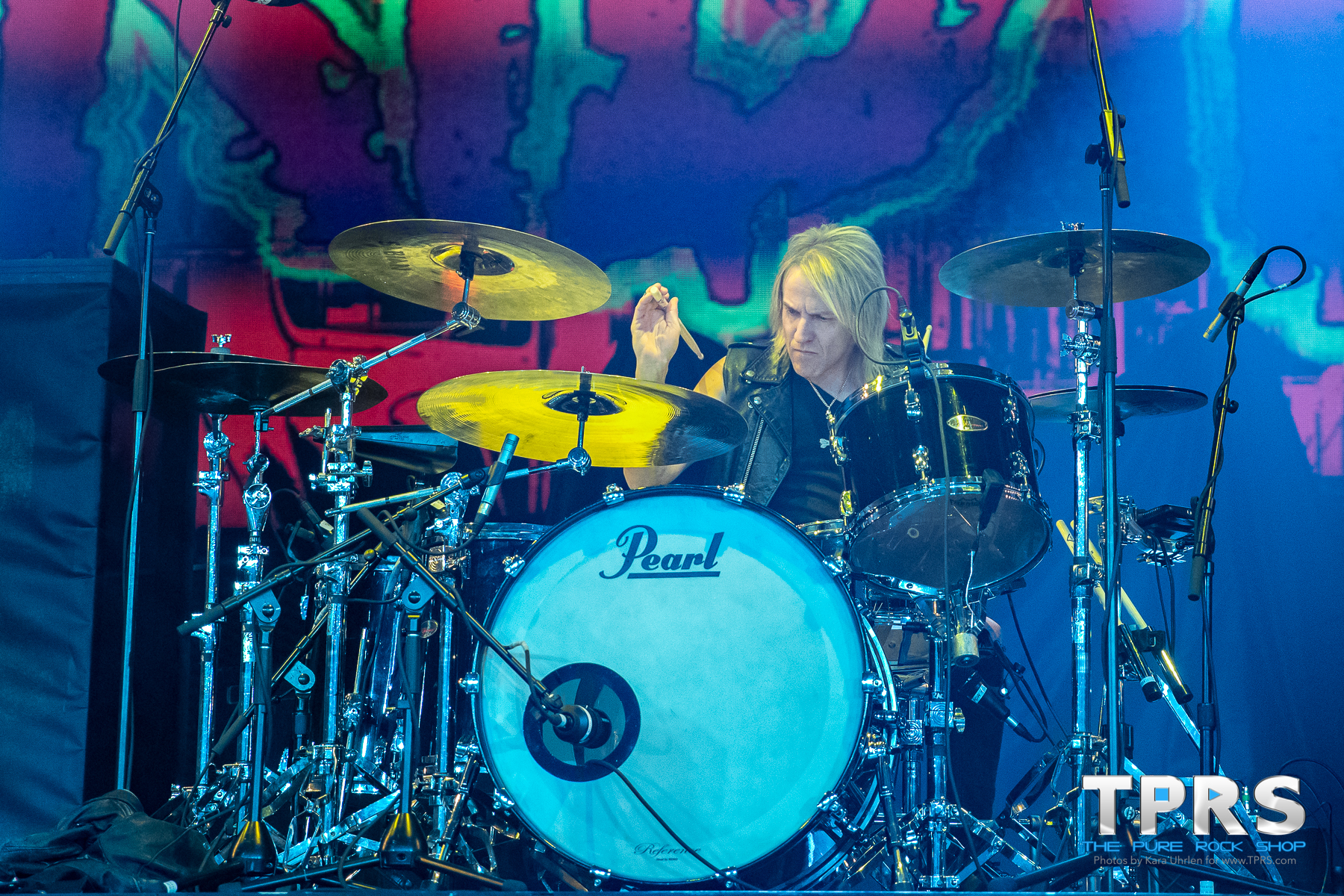 Were there first show jitters, when the kicked things off with the hard-hitting “Slave to the Grind” and “Big Guns”? You bet, but by the time the band got to “Monkey Business,” the crowd knew just how special this evening was.  A dream becoming a reality for a talented recruit, and what is likely to become a resurrection of one of our all-time favorite bands.  With a frontman from Sweden, there is a whole new world of fans ready to love Skid Row, and an older generation of fans ready to love them again.  If the new song is any indication, this album is going to blow our minds! 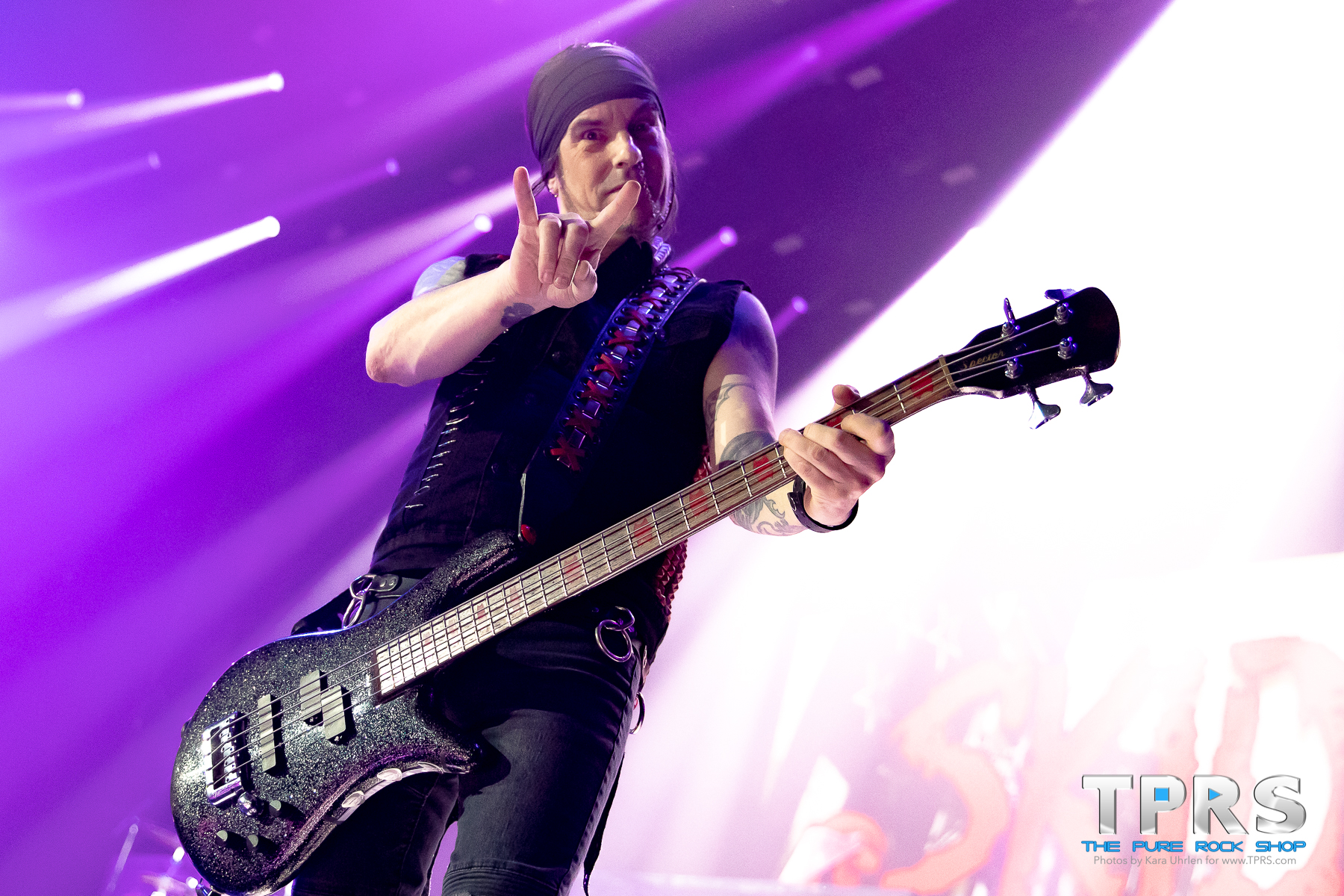 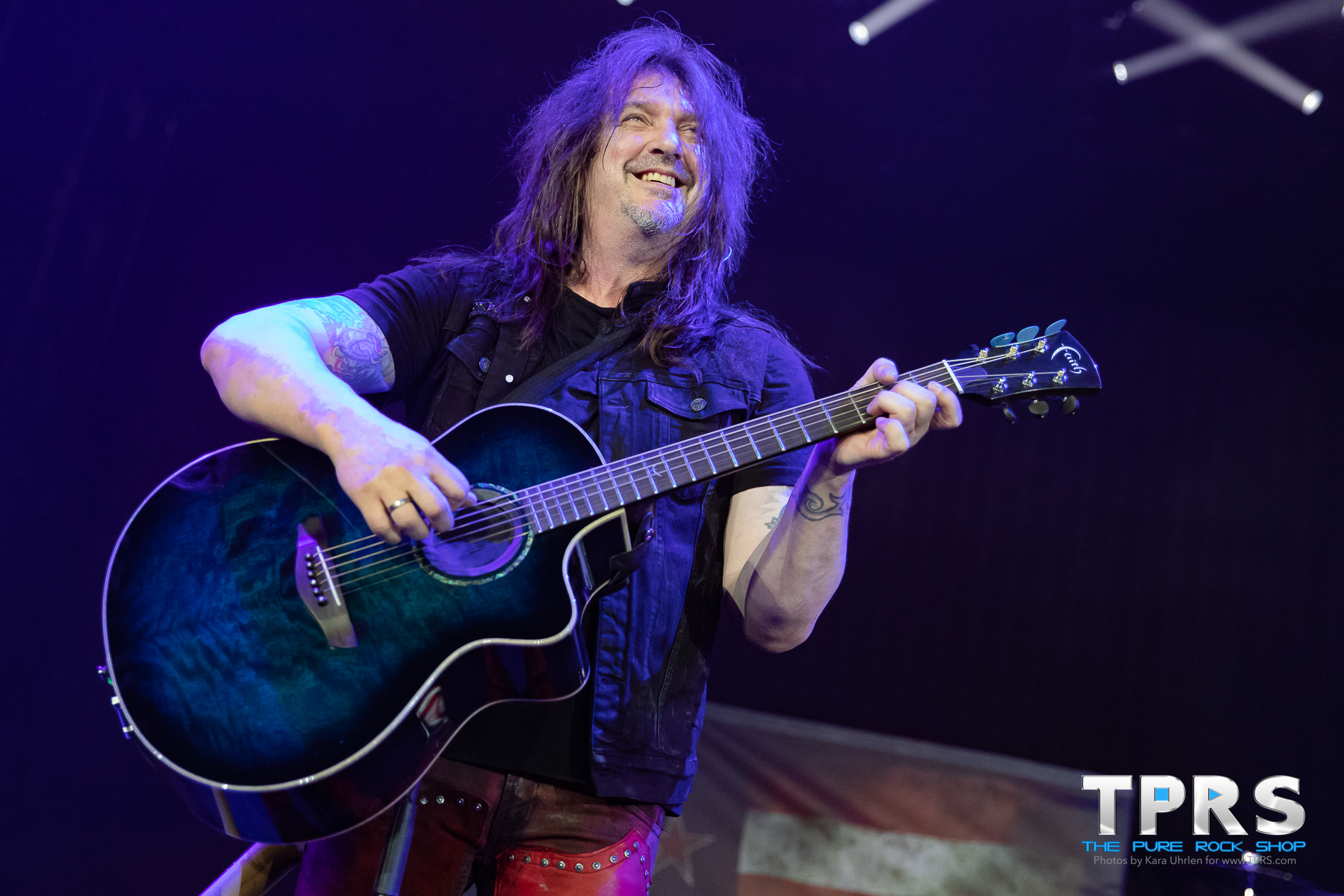 Other highlights included a cool band moment with Snake, Rachel and Erik, starting the song together, and Snake playing a beautiful new acoustic from Faith guitars in the United Kingdom.  It was followed by the new single, and of course, the finale of “Youth Gone Wild” which began with a heartfelt moment of thanks from the new frontman where he thanked the band, the fans, and even beer for a great show! 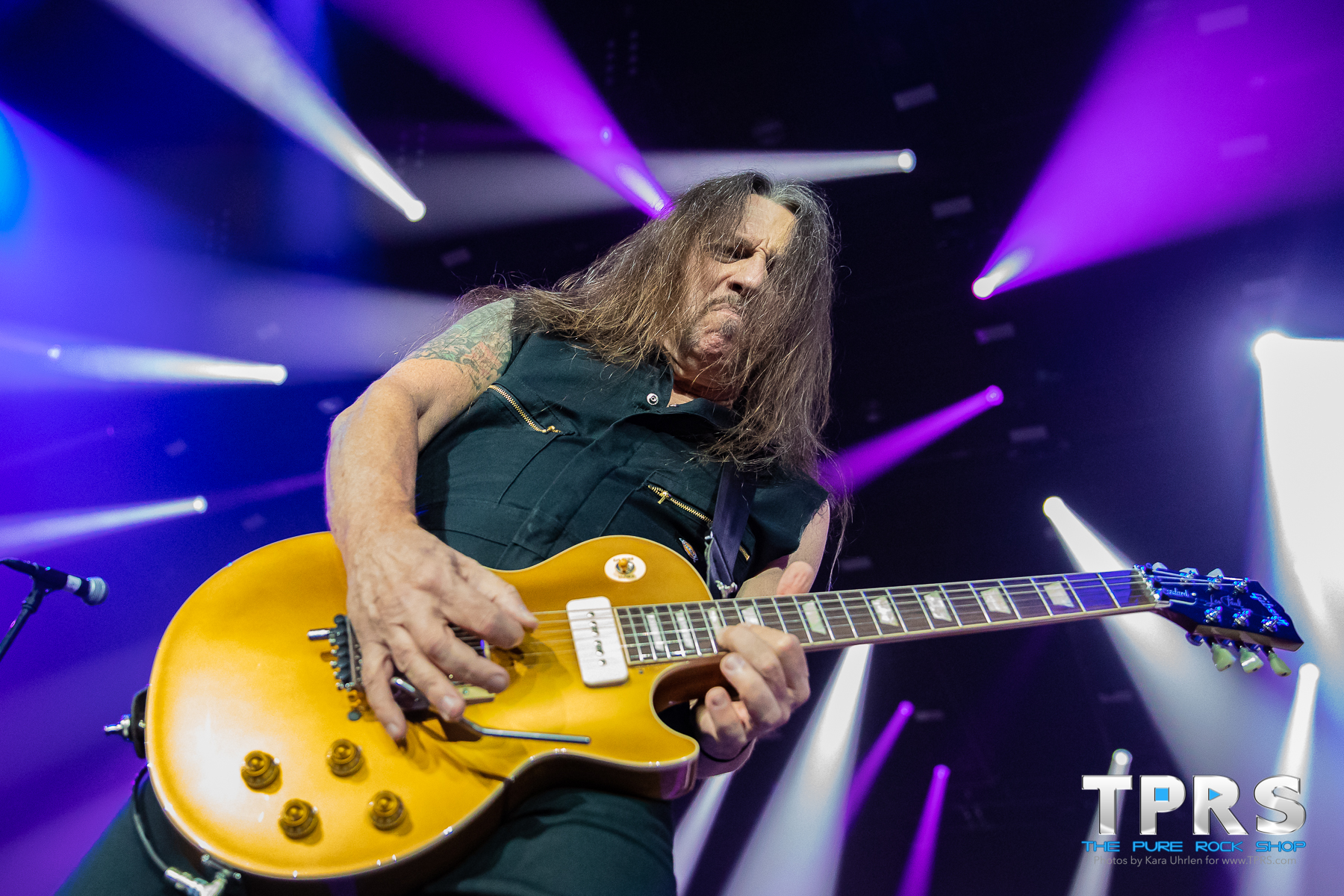 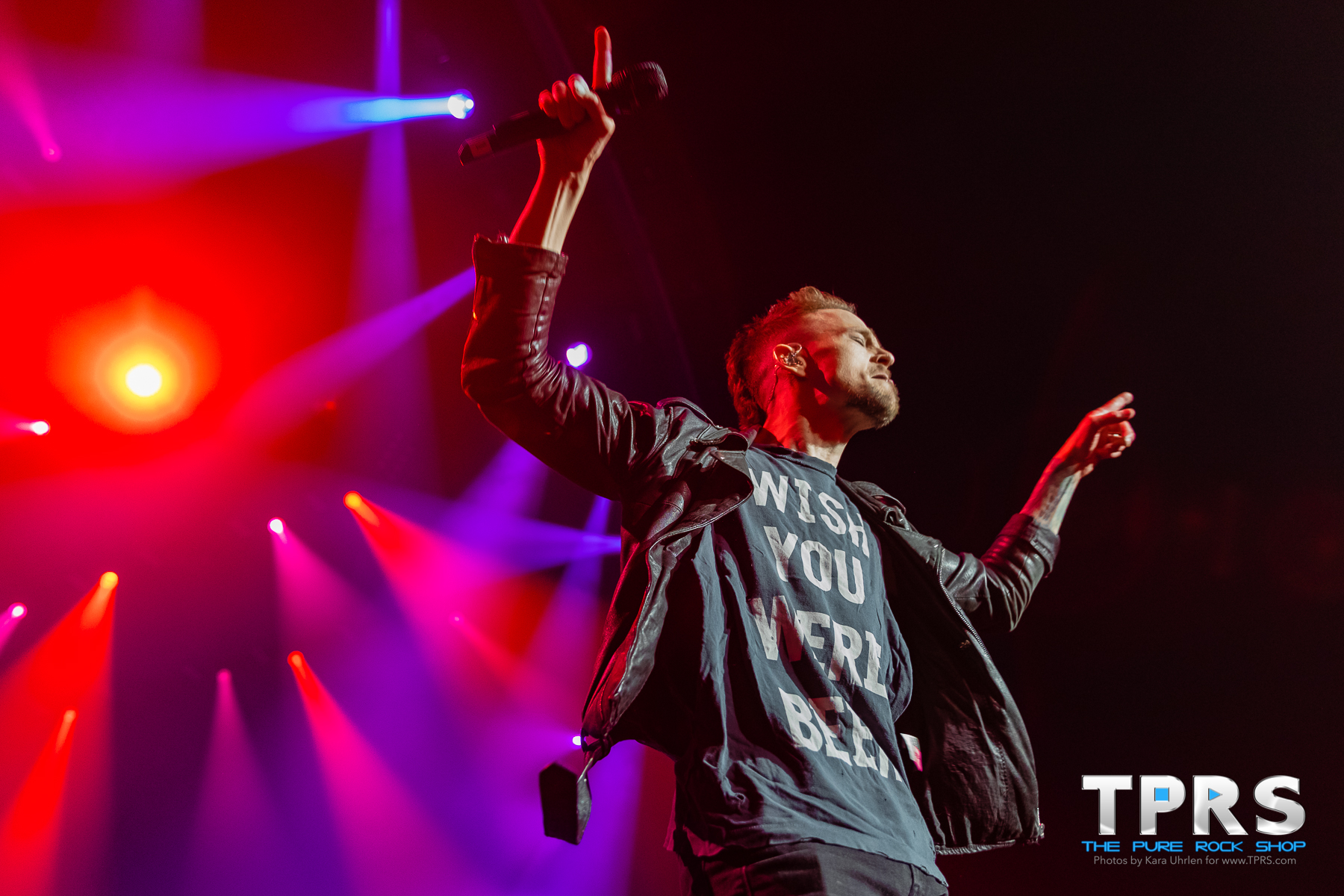 Follow us @ThePureRockShop on Facebook and Instagram for more local show coverage including Dragonforce at the Roxian Theater on April 8th which will include a scheduled interview with Firewind’s Gus G., as well as festival coverage including the Monsters of Rock Cruise,  upcoming M3 Music Festival this May in Baltimore (which will include more Skid Row coverage), and Masquerade in Philadelphia in July.

Check back soon for coverage from Foreigner in Vegas!